For fulfillment details of this Prophecy – see bottom of page

The Lord has spoken with me through a dream on the night of October 1, 2014 concerning an airplane crash and what appeared like a state funeral or a public funeral for an influential personality, someone whom the nation of Kenya is going to mourn.

In this dream, a dream that left me TROUBLED, the Lord showed me a airplane in the sky from the point where I was standing.  I saw the plane flying  at a very low height.  The Lord let me to see the plane in turbulence.   I was in a house when the plane made unusual sound from its engine and it was at this time the Lord made me to get out and check it out.

I saw this plane flying at and unusual height, but then I saw further changes in altitude as it turned slowly to the left.  I saw it navigate and move the way a planes does when in turbulence, drifting lower and trying to return to where it took off from, as it should, should  there be any distress.

As I watched, terrified and shaken, the plane disappeared  from my view.  I heard the most LOUD bang that deafened my ears; the sound of two objects hitting together, a very huge sound.  I cannot remember very well, but it seemed like something happened up there, because I heard the sound up in the sky and I saw a huge mass overshadowed it and darkness falling from the sky.

I also see people running away from the scene where this took place.  It was like something happens to the plane while in the sky, but what I saw coming down, was so different from the plane I saw initially.

What shocked me more was that there appeared to be connection between the plane incident and the public funeral service which I am about to share.

The Lord showed me a public funeral immediately after the first dream.  I do not fully know at what point the Lord connects the two, even still, if He really connected the two.  I was PERSONALLY SHAKEN.

These are weighty issues before us.  Sometimes the Lord shows us things that don’t really connect in time, place or purpose.  They appear in more or else a straight line, yet their fulfillments are also so a part.  Nevertheless , I SEE A PLANE GOING TO CRASH as you read above and I SEE A PUBLIC MOURNING, A PUBLIC FUNERAL , A STATE FUNERAL IN KENYA  as follows.

It was after I awoke that He took me for another sleep and then lifted me out of my body to an open stadium.  It appeared like an enclosed ground and there was funeral service in progress.  I was a big funeral gathering  and The Lord let me know that it was a funeral.  As I entered the assembly,  I could  see Government of Kenya branded vehicles in this stadium with administration police.  Many people were gathered in the stadium.  There was one of the former presidents whom I saw there in attendance, but then  the Lord closed everything and sealed it for himself.

With my own eyes, I also saw the person who was leading this service giving Eulogy of the one who had died.   It was a long Eulogy he gave, exchanging one page after another, all which bore the details of the life of one who had died.  It was while I was witnessing these things, that an unidentified messenger appeared.  I don’t know who approached the other, but we faced each other and I confronted him in conversation, asking him to let me know whose Funeral this was (would be) but he, the man, moved away and disappeared from my sight without saying anything in regard to this gathering.  This happened to make me know he was a messenger from God.

Precious people, when the Westgate Attack occurred but before it happened, I posted it here in Facebook, just the way I do every time.  Anything the Lord gives it is for His people to reason out with Him and stand in the gap for it.  Even the outcome of presidential elections back then, I posted it.  People prayed and God selected His own.  Many more I shared, but did not post.  So, yes, this is for God’s people to pray and stand in the gap, the place where God stands.

Always,  Kenya is a revival fire and sparks carrier to the Nations.  The Lamb of God has been slain for Kenya and there is nowhere in this land that the Blood of Jesus cannot wash clean.

We meet challenges and obstacles as a people, but we have never failed to overcome, because God loves this Nation of Kenya.  Each challenge and darkness is an opportunity to shed more Light, pushing darkness where it belongs, only more strongly.

The previous month was just planes, planes and more planes.  The Lord was showing me planes , the distresses that plane meet and those in them.  The first time I realized something may go wrong was when I found myself in an airport, taken there in a dream.  That was about two weeks ago and I saw the this plane that was already on the runway ready to take off.  At that time I noticed something wrong with its left wing, as I saw something black in color hanging, on the Lower side left of the aircraft.  I rushed towards the plane telling them not to take off, but the plane lifted off the ground  and it flew a way.  Then I saw it crash.

Again on October 2, 2014 a day after the  above visitation, the Lord took me again in a dream, a very brief vision this time, perhaps the shortest I have ever had.  This time He took me to a place and He made it known to me as the place where the plane had crashed.

We must pray as a church and cover the Leadership and all Leaders in the Land, and get rid of the enemy within us and around, and beyond our borders.

“What other nation is so great as to have their gods near them the way the LORD our God is near us whenever we pray to him?”   Deuteronomy 4:7.

Fulfillment of Part of this Prophecy:

Part of this above prophecy was fulfilled on Tuesday, 18 November with the sudden death of Senator Otieno Kajwang.  His funeral service was held on Thursday, 27 November 2014 at Uhuru Park Nairobi. 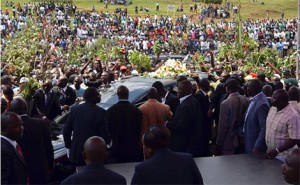 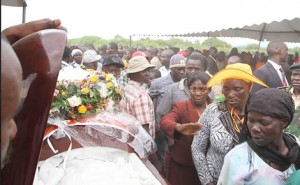 Thousands of Waondo residents Thursday turned up to receive the body of the late Homa Bay Senator Otieno Kajwang’.

Dear Readers, the message I have pasted below is from is one of the people who are praying and confirming the prophecy I gave on plane crash and state funeral, as above.
Other people have talked to me about the same word and they seem to have witnessed.
I was surprised hear that this woman received that dream also, only one or two days after I saw it.  Many people are praying for the nation.

“Man of God, I don’t know you in person, but I have seen a post you put up yesterday in His Kingdom Prophecy about the dream/Vision God gave you and I felt I needed to respond to it and also add you as a friend here on Facebook.  I had almost a similar dream on Friday night (October 3, 2014).  I saw myself in a plane as a passenger and I noticed the plane was not taking off as it should.  It’s like it took off, then all of a sudden it came down and it’s like I found myself watching the pilot as he struggled to stabilize the plane.  But unfortunately it had to make an emergency landing on a road and I saw cars trying to evade it.  All of a sudden, when finally the plane managed to stop, I saw it’s like we were on top of a cliff and I saw many dead bodies scattered on the road side.  What caught my attention was a fat man who lay flat on his stomach.  He had a light blue shirt on him.  Until we got there, we had not realize how fatal the accident was.
I woke up in the morning and I was so shaken, but deep in my spirit I knew this must be a prophetic dream.  Sometime last year I had a dream that a prominent person in the country had died too.  That person is still alive to this day because I was told his name in the dream.  I thank God for the dream you just shared which has shed some more light.  God does nothing until He reveals it to His servants the prophets.  Glory be to His name.”

Prophet Peter Odhiambo is the founder of Heart Revival Network  International, Kenya  and a Prophetic Endtime Minister of the Gospel.  He preaches in Crusades, open air and Revival meetings.  The Lord continuously shows him concerning apostasy in the Church and the need to prepare the Bride to fit into the Wedding of the Lamb, according to Revelation 19:7-8.