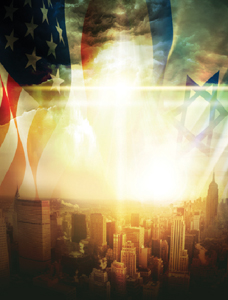 More than 2,700 years ago God gave ancient Israel a specific warning accompanied by nine symbolic signs of things to come if it didn’t return to Him. Those same harbingers of destruction are today reappearing—in uncanny detail—in America. Has God issued the same prophetic message for our nation of what is yet to come?

It might sound like the plot of a science fiction novel or an Indiana Jones movie, but it’s real. In fact, it’s so real that it has affected and is affecting the course of our nation to this day.

The Nine Harbingers of Judgment
I was standing at the edge of ground zero in New York City when my attention was drawn to an object that would comprise the first puzzle piece of an ancient biblical mystery—a prophetic message known as The Harbinger concerning the future of America. A harbinger is a sign or foreshadow of things to come, an omen of warning. Before God judges a nation, He sends warning. He repeatedly sent warning to ancient Israel through the prophets. In 732 B.C., after years of calling Israel back—to no avail—God removed Israel’s hedge of protection and allowed its enemies to breach its borders in a devastating strike that would traumatize the nation. It was an alarm and a call to return to God.

Instead of heeding the call and responding with repentance, the nation responded with defiance. In Isaiah 9:9-10, the prophet recorded how the Israelites proclaimed a vow, saying “in pride and arrogance of heart: ‘The bricks have fallen down, but we will rebuild with hewn stones; the sycamores are cut down, but we will replace them with cedars.’”

What they were saying, in other words, was this: “We will not be humbled and we will not repent or return to God. We will continue in our course of rebellion. We will defy the hand of God and rebuild stronger than before.”

Israel’s defiance in the face of God’s repeated warnings sealed its fate. There then appeared in Israel nine harbingers of judgement—nine prophetic signs, alarms and foreshadows of what was to come.

Today America is the nation in rapid departure from God’s will. And God has likewise allowed America’s hedge of protection to fail and an enemy to breach its borders in a devastating strike that began on Sept. 11, 2001. It was, as with Israel, a nation’s wake-up call.

Yet America, like Israel, has not responded with repentance but with defiance. Long before the rebuilding began at ground zero, while the dust of the attack still hovered above the ground of devastation, a well-known American senator issued this call: “I believe one of the first things we should commit to … is to rebuild the towers of the World Trade Center and show the world we are not afraid—we are defiant!” Other key leaders—from the mayor and governor of New York to the president of the United States—offered similarly defiant proclamations, echoing the same sentiment boldly pronounced thousands of years earlier by ancient Israel’s leaders.

And now the same nine harbingers of judgement that appeared in the last of ancient Israel have reappeared on American soil. Four harbingers have manifested in visible detail at ground zero, two have manifested in Washington, D.C., and several involving the highest leaders in the land. Each harbinger contains a prophetic message. To reveal all the mysteries of The Harbinger would not be possible in an article—thus, I was led to put the revelations of the mystery into a book. But I will do my best here to touch on one of the nine harbingers and some of the other mysteries involved.

The Declaration of Defiance
As ancient Israel rose from the ruins of the first attack and calamity, the nation’s leaders uttered a specific series of words—the declaration recorded in Isaiah 9:10. These words would form a vow of defiance against God. This vowing, in the form of a prophecy, was the ninth harbinger—one that would seal Israel’s fate and lead to its destruction.

The morning after 9/11, this ninth harbinger reappeared after more than 2,000 years to America—on Capitol Hill. On that day, the Senate majority leader was to present the nation’s response to the calamity. He closed his speech with a proclamation, declaring the fateful words Israel’s ancient leaders had asserted 2,700 years before in the last days of that nation’s judgement—the exact same vow, word for word.

The Senate majority leader had no idea what he was doing. But in making this proclamation, he was declaring judgement on America. His words were prophetic. They would foretell the nation’s future—that America would follow the course of ancient Israel, a course carrying the gravest of consequences.

According to the ancient mystery, if after the first calamity and warning the nation doesn’t return to God but responds in defiance, its response will end up triggering a second calamity. And that’s exactly what happened with America. In the days after the attack, the Federal Reserve sought to defy the effect of 9/11 by a series of actions that would slash the nation’s interest rates to extreme levels. This attempt to defy 9/11 would create an economic house of cards that would come crashing down seven years later.

In 2008, the government and the Federal Reserve would make a second fatal mistake, a decision that would collapse the American economy and lead to the Great Recession. Amazingly, this decision took place exactly on the seventh anniversary of the day when the ancient vow of defiance was uttered on Capitol Hill.

So, too, an ancient biblical mystery exists that actually ordained the day, even the hour, of the greatest collapse in this economic implosion—in fact, the greatest crash in Wall Street history. This mystery centers on the biblical Shemitah.

Every seventh year, the Shemitah, or Sabbath Year, would cause the land to rest. During that year all sowing and reaping, as well as buying and selling of the land’s fruit, would come to a standstill. But on the last day of the Sabbath year, the full force of the Shemitah would be manifested. On that day, the 29th day of the Hebrew month of Elul, all debts and credit would be released. Obviously, the Shemitah affected the nation’s economic and financial realms, wiping away its financial accounts and nullifying both credit and debt.

This Sabbath year of national rest was meant to be a blessing. But if Israel turned from God and drove Him out of its life, then the Shemitah would become a sign of judgement.

And that’s exactly what happened. As Israel departed from God, it was judged based on the Shemitah as the nation’s financial accounts were wiped away, as the land was devastated, and all sowing, reaping and trade came to a standstill.

In September 2008, the American economy collapsed. The peak of that collapse came at the end of September with the greatest stock market point crash in American history. When did it happen? On the ancient biblical calendar, it happened on the 29th day of the month of Elul, the biblical day of the Shemitah—the very day appointed by God to wipe away a nation’s financial accounts!

Seven years before that was the greatest stock market crash in American history up to that date. It was the crash caused by 9/11. When did that crash take place? On the 29th day of the month of Elul—the exact day of the Shemitah!

Thus the crash of 2001 and the crash of 2008, the two greatest financial collapses in Wall Street and American history up to the time of their occurrence, each happened on the exact same Hebrew day—the day specifically appointed in the Bible for the judgement of a nation’s financial realm—and the sign against a people who have departed from God.

America’s Mystery Ground
When judgement came upon ancient Israel, the calamity reached its finality when it touched and destroyed the ground of the Temple Mount. There was a reason for that. This was where Israel had been consecrated to God.

As a principle of judgement, destruction will often return to the very place where a nation was founded—its ground of consecration. This, in itself, is a sign or mystery of return; and for ancient Israel, God was calling the nation back to Himself.

What about 9/11? Could there also be in the American calamity such a mystery of return? Could there be a prophetic message hidden in the place where it happened?

History tells us that America’s first day as a fully formed nation was not in 1776, but actually April 30, 1789, when for the first time the nation and its government was led by a president. And on that first day, embedded in America’s foundation is a prophetic message—a warning spoken by the nation’s newly inaugurated president that is now coming to pass in our day.

After that warning was given, the president led the nation’s first fully formed government in its first act: to pray, to commit and to consecrate America’s future to God. The president and members of Congress proceeded on foot to the place especially chosen for this act. This was America’s consecration ground.

What Does the Future Hold?
Two years before 9/11, I stood overlooking the Hudson River in a gathering of prayer for God’s mercy on New York. We had come together based on a prophetic sense that a terrorist attack would come to the city in future days. As I led the group in prayer, my focus was drawn to the two towers of the World Trade Center across the water. A deep sense came over me of things yet to come for America. It would not be long before it all began.

There is much more concerning the ancient mystery and what the future holds than I could possibly share here, but I do so now as a prophetic call first to God’s people. Our nation is in danger, and God continues to call. In His mercy He has sent warning to wake us up that we might return to Him. His will is that none should perish.

But if our nation is to avoid destruction, we, as God’s people, must be the first to respond. The call is this: “If My people who are called by My name will humble themselves, and pray and seek My face, and turn from their wicked ways, then I will hear from heaven, and will forgive their sin and heal their land” (2 Chr. 7:14, emphasis added).

As the people “called by His name,” we must intercede for our nation, for mercy, for repentance and for revival. And we must be part of that revival; we must be the first to repent. Now is the time to get our own lives right, to put away what must be put away and to rise to the calling God has given us. It’s time to shine the light of salvation and boldly proclaim the word of salvation.

Pray also that God would have His way with the message of The Harbinger for the salvation of the lost. We are the watchmen on the walls. We cannot fail to sound the alarm. We must sound it, that our nation may awaken … and the lost be saved.