↓
Home→Prophecy→Speak Your Faith.. “My ‘Speak to the Wind’ Testimony” 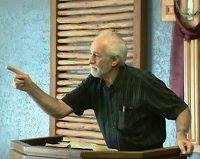 The Power of SPEAKING FAITH….

I feel led of the Lord to share a very meaningful testimony of the night the Lord told me to SPEAK TO THE WIND. This was one of the most real nights of my life. I spoke to the HIGH WIND BLOWING THAT NIGHT…. and… IT STOPPED BLOWING. I was so blessed, let me tell you how how this happened:

I had gone to the desert to fast, pray, and to seek God. I had been wandering in my life and had walked my own way for almost 10 years. I needed desperately to find answers… well, find them I did. I will not go into all my desert encounter testimony now, but go to the last night of the FIVE days that the Lord so wonderfully spoke to me.

I had been talking with the Lord all day, and reading the scripture. I had been led to read the story found in Mark 4:35-41. You know the story. It was about the day the Lord and his Disciples had taken the boat and were going to the other side. A storm had suddenly come up, and the WIND was blowing very hard. The boat was tossed in the sea and the water was flowing over the sides so fast, the boat was filling up with water. JESUS WAS ASLEEP on a pillow in the hinder part of the ship. They awoke Jesus and asked Him, “MASTER, CAREST THOU NOT THAT WE PERISH?” Jesus than arose and rebuked the wind… (SPOKE TO THE WIND), and the wind stopped blowing, finally ceased, and there was a great calm. He then asked them, “Why are you so fearful? How is it that ye have no faith?”

I know now that it was no mistake that the Lord had led me to read this story, although up to the time the wind had began to blow upon my 30 foot fifth wheel trailer, HE HAD SAID NOTHING TO ME ABOUT THIS STORY. I had just, I thought, happened to read it, seeing that I had been reading a lot in the Bible that day.

The wind began to blow with such fierceness that the trailer began to strain and rock in its force. It became alarming, for I had known of trailers blowing over. The wind was so strong that I began to worry. It had grown late, and was about 9:30 pm. I heard the Lord say, “Why are you afraid? This trailer has been here since ’94 and it has not blown away yet…. Go to bed and rest, stop worrying. I was comforted and went on to bed, allowing the rocking of the trailer and the wind to rock me to sleep. I was content with the words that had been spoken to me, so I slept. Suddenly at about 2 am the wind worsened, and was now blowing in great gusts, which would hit the trailer with such force that the trailer began to lean and feel like it would turn over. I jumped out of bed and put on my clothes. Going out into the wind, I drove my large truck around the trailer and placed it between the wind and the trailer in an effort to divert the wind from hitting the trailer so hard. Leaving the truck, I started back into the trailer, when the wind blew one of my empty water barrels through the darkness hitting me so hard it knocked me down. It was like fear gripped my heart. Here I was, 35 miles into the desert, on a dark night, alone, and the wind was howling. It was frightening, to say the least.

Finally, I was able to get back into the trailer and I began to pray, and I said, “Lord Help me, or else this trailer could blow away!” Again, I heard him say, oh, why you don‟t just go to bed, everything will be OK. Hearing His voice of comfort I relaxed and pulled off my clothes and began to get into bed, pulling up the covers again.

SUDDENLY I HEARD HIM SAY “SPEAK TO THE WIND AND TELL IT TO QUIT BLOWING”. Lord, I said, “I can‟t make the wind stop blowing; only you can do that.” He then explained to me that I was wrong, and that I could do the same thing He had done in the boat that day on the sea. He reminded me of how he had said to his disciples “HOW IS IT YOU HAVE NO FAITH?” He then told me; I, too, could stop the wind by faith! Cautiously, I than spoke these words….. PEACE BE STILL! Immediately the wind ceased. It was wonderful and peaceful. I looked out the dimly moonlit window at the juniper standing by the window, which had moments before been blowing against the trailer. It now stood motionless. I said WOW! LORD, THIS IS NEAT, CAN I TELL PEOPLE ABOUT THIS! Yes, He said, you can.

Then I heard wind blowing (from somewhere else), and it came closer and closer until it again burst upon the trailer, rocking the trailer with great force. AGAIN HE SAID, SPEAK TO THE WIND. I DID SPEAK, AND IT STOPPED AGAIN! All this time I could hear the wind blowing, some where else over there, yet it was totally peaceful right there in the trailer, and all around the trailer!

This same procedure repeated itself the third time…. then I head Him say, “I am teaching you this lesson on how to SPEAK YOUR FAITH!

The third time I spoke to the wind it quit blowing, and it became so peaceful that the only way I can express it to you is by saying this… it was just heavenly peace, PEACE BEYOND UNDERSTANDING! I laid there in that trailer, so full of peace and I felt so close to the Lord that all I could think of doing was to just pray for all my family. I did so desire for them to all experience this wonderful peace. I drifted off to sleep, and the wind did not blow again that night. All was quiet.

After rising the next morning, all was quiet and peaceful until I noticed that the wind, the night before, had blown out my pilot light on my hot water heater. I said to myself, I will go out and light it. (I had to stand outside the trailer, open the heater door, and manually light the pilot with a match.) At that moment I heard the wind begin to blow again rather briskly, for the first time since my last word to it. “Oh no!” I exclaimed, I can not light that heater in the wind. It will just keep blowing out my match…. Then I heard the Lord say: “I thought we settled the wind problem last night?” Oh yes, I said, your right, being plainly embarrassed. I then took the matches and went out to the heater. I opened the door, then turned looking into the wind and said, PEACE BE STILL and again the wind stopped. I lit the burner, shut the door, and just as I began to walk away, the wind began to blow again. WOW, I SAID, WHAT A BLESSING.

The Lord said “Now it is time to talk.” He had me open up the Bible to that story again. He then told me to write the words in the margin beside the story, “SPEAK YOUR FAITH”. Now read on He said, and I began to read further into Mark. In Mark 5:8 I came to the verse that says, “FOR HE SAID unto him, Come out of the man, thou unclean spirit.” Again He said write…. ”SPEAK YOUR FAITH.” This continued over, and over again, as I continued to read. Every time I would read how Jesus SPOKE WORDS OF FAITH to people, He said again to write…”SPEAK YOUR FAITH.” The following list is provided to give the exact verses that the Lord had me write in the Margin next to, “speak your faith”:

Read each of these stories, and notice each time Jesus spoke and the results of the speaking of faith.

In Mark 5:35-36 we see a very interesting lesson on the IMPORTANCE OF WHAT YOU SAY. Jesus was on His way down to raise Jairus’ daughter, when men came from Jairus’ home with the bad news of how Jairus’ daughter had died. The Words they spoke were… “Thy daughter is dead: WHY TROUBLEST THOU THE MASTER ANY FURTHER? Notice how Jesus reacted to their message and statement…. He turned immediately “AS SOON AS JESUS HEARD THE WORD THAT WAS SPOKEN” to Jairus and told him (spoke to him a POSITIVE WORD)…. ”BE NOT AFRAID, ONLY BELIEVE.”

[Understand how the enemy speaks words to discourage faith. The world considers death final, but NOTHING IS FINAL WITH JESUS!!!!!! We should never accept the NEGATIVE WORDS SPOKEN BY THE ENEMY.] I have never forgotten this time I spent with the Lord, and how he taught me the IMPORTANCE OF SPEAKING FAITH.

I know that this lesson is as IMPORTANT TODAY AS IT WAS IN 99. It is a lesson we all need to learn. We can speak faith even as Jesus did, and we too can see miracles happen, because of FAITH SPOKEN!!! The scripture tells us that we HAVE WHAT WE SAY.

In Mark 11:23 it says…. ”For verily I SAY UNTO YOU, That whosoever shall SAY unto this mountain, Be thou removed, and be thou cast into the sea; and shall not doubt in his heart, but shall believe that those things which he SAITH shall come to pass; HE SHALL HAVE WHATSOEVER HE SAITH. This could very well also INCLUDE ANY NEGATIVE THING WE SPEAK. WE SHOULD WATCH OUR MOUTH AND WATCH OUR WORDS.
Prophet Ken Dewey