The Angel Knitting, the New Scroll, and the Flag Pole Vision (December 1, 2013)

Listen to The Podcast

(My encounters over the past four days, listed out in order
and in previous understandings of others for you all)

Encounters with The Angel Emma:

Twice, Bob Jones asked Todd Bentley about this angel that was in Kansas City in 1980. Bob asked Todd, “Have you ever seen the angel by the name of Emma?” He asked me (Todd) as if he was expecting that this angel was appearing to me. Surprised, I said, “Bob, who is Emma?” He told me that Emma was the angel that helped birth and start the whole prophetic movement in Kansas City in the 1980’s. She was a mothering type angel, that helped nurture the prophetic as it broke out. Within a few weeks of Bob asking me about Emma, I was in a service in Beulah, ND. In the middle of the service, I was in conversation with Evan and another person, when in walks Emma.

As I stared at the angel with open eyes, the Lord said, “Here’s Emma.” I ‘m not kidding. She floated a couple of inches off the floor. It was almost like Kathryn Kuhlman in those old video’s. When she wore a white dress and looked like she was gliding across the platform. Emma appeared beautiful and young, about 22 years old, but she was old, at the same time. She seemed the carry the wisdom, virtue, and grace of Proverbs 31 on her life.

Susan’s Vision of The New Scroll and Flag Pole:

During the pre-service worship time, I was walking and worshipping and waving the Lion of Judah flag, and I went into a vision. I saw a tall flag pole and the US flag on it, but it was being lowered, then it was gone. There was an air of uncertainty among the people in the vision as I watched.

The angel then nodded in satisfaction and hovered in the air above the peoples. He then said with fire in his eyes, “Remember”, and flew away. 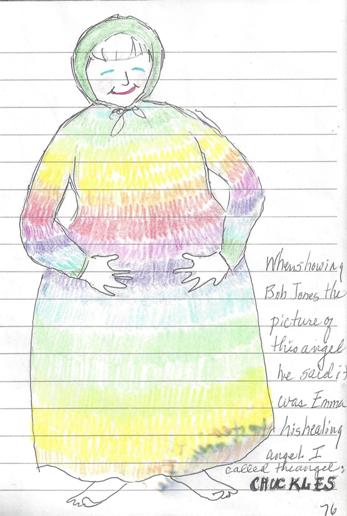 This picture is taken right out of one of my journals from early 1995. At that time Albert and I were living in Florida fairly near Bob Jones and his wife. Once a week, we ate with them at one of the Panama City restaurants. It was great fun. I had only recently begun to see into heaven and even go there on multiple occasions. This particular angel came to me one morning. She did not give me her name. Therefore, because she made me laugh, I called her “Chuckles”.

Later that week I showed the picture to Bob Jones. He said the angel was “Emma” — the healing angel. The text right near Emma was written into the journal in 1995 right after I showed Bob this picture. The discoloration at the bottom of the journal’s page is from water damage. My journals were soaked with water when the fire department tried to keep our home from burning to the ground. They did not succeed but the journals survived. Since many have heard Emma’s name when they either went to Lakeland Florida during the move of the Spirit or watched it on TV.

I was sitting on the couch listening to worship music and suddenly I saw the angel Emma sitting on the sofa, and she had a woven basket in her lap full of yarn and she was knitting baby booties, smiling as she knit. She made all of kinds of booties, and many were colorful. She was intent upon her task, but I could also see that she was content with her current progress in the making of the booties.

Later on, as I was lying on my bed, I saw the angel again, and this time, I as in the air, and she had a fiery apron in her hands. She said, “Will you father the motherless, and mother the fatherless? Will you nurture this generation and wear this fiery vest? I raised my hands and she placed the fiery apron over my transparent body, and it then fused itself right into me.

We have been offered a responsibility to father, mother, and nurture this generation into maturity.

The Key to Harvest is “TIMING”:

God is getting everything ready in this ‘Set Time of Prophetic Fulfillment’ and He is making everyone ready at the same time for the new things that are now unfolding, in preparation for the bigger releases about to come.

“But God said, Sarah your wife shall bear you a son indeed, and you shall call his name Isaac [laughter]; and I will establish My covenant or solemn pledge with him for an everlasting covenant and with his posterity after him. 21 But My covenant, My promise and pledge, I will establish with Isaac, whom Sarah will bear to you at this season next year” Genesis 17:19 AMP.

“21 But my covenant will I establish with Isaac, which Sarah shall bear unto thee at this set time in the next year” KJV

We Are Being Knit Together For His Purposes:

“For You did form my inward parts; You did knit me together in my mother’s womb. 14 I will confess and praise You for You are fearful and wonderful and for the awful wonder of my birth! Wonderful are Your works, and that my inner self knows right well. 15 My frame was not hidden from You when I was being formed in secret [and] intricately and curiously wrought [as if embroidered with various colors] in the depths of the earth [a region of darkness and mystery].16 Your eyes saw my unformed substance, and in Your book all the days [of my life] were written before ever they took shape, when as yet there was none of them. 17 How precious and weighty also are Your thoughts to me, O God! How vast is the sum of them! 18 If I could count them, they would be more in number than the sand. When I awoke, [could I count to the end] I would still be with You”Psalms 139:13-18.

“You have clothed me with skin and flesh and have knit me together with bones and sinews.12 You have granted me life and favor, and Your providence has preserved my spirit“Job 10:11.

“But as for you, the anointing (the sacred appointment, the unction) which you received from Him abides [ permanently] in you; [so] then you have no need that anyone should instruct you. But just as His anointing teaches you concerning everything and is true and is no falsehood, so you must abide in (live in, never depart from) Him [being rooted in Him, knit to Him], just as [His anointing] has taught you [to do]” 1 John 2:27.

“[For my concern is] that their hearts may be braced (comforted, cheered, and encouraged) as they are knit together in love, that they may come to have all the abounding wealth and blessings of assured conviction of understanding, and that they may become progressively more intimately acquainted with and may know more definitely and accurately and thoroughly that mystic secret of God, [which is] Christ (the Anointed One)“ Colossians 2:2.

“For because of Him the whole body (the church, in all its various parts), closely joined and firmly knit together by the joints and ligaments with which it is supplied, when each part [with power adapted to its need] is working properly [in all its functions], grows to full maturity, building itself up in love“Ephesians 4:16.

The Pole lifted up above the people:

“And they journeyed from mount Hor by the way of the Red sea , to compass the land of Edom: and the soul of the people was much discouraged because of the way . 9 And the people spake against God, and against Moses, Wherefore have ye brought us up out of Egypt to die in the wilderness? For there is no bread , neither is there any water; and our soul loatheth this light bread. 10 And the LORD sent fiery serpents among the people, and they bit the people; and much people of Israel died. 11 Therefore the people came to Moses, and said, We have sinned, for we have spoken against the LORD, and against thee; pray unto the LORD, that he take away the serpents from us. And Moses prayed for the people. 12 And the LORD said unto Moses, Make thee a fiery serpent, and set it upon a pole: and it shall come to pass, that every one that is bitten, when he looketh upon it, shall live . 13 And Moses made a serpent of brass, and put it upon a pole, and it came to pass, that if a serpent had bitten any man, when he beheld the serpent of brass, he lived”Deuteronomy 21:8-13.

“And I said, I pray You, O Jehovah, the God of Heaven, the great and awesome God who keeps covenant and mercy for those who love Him and keep His commandments; 6 let Your ear now be open, and Your eyes open, so that You may hear the prayer of Your servant, which I pray before You now, day and night, for the sons of Israel Your servants, and confessing the sins of the sons of Israel which we have sinned against You. Both I and my father’s house have sinned. 7 We have acted very wickedly against You, and have not kept the commandments nor the statutes nor the judgments which You commanded Your servant Moses. 8 I pray You, remember the Word that You commanded Your servant Moses, saying, If you sin, I will scatter you among the nations, 9 but if you turn to Me, and keep My commandments and do them, though you were cast out to the outermost part of the heavens, yet I will gather you from there and will bring you to the place that I have chosen to set My name there. 10 And these are Your servants and Your people whom You have redeemed by Your great power and by Your strong hand” Nehemiah 1:5-10.

The Rev. Susan O’Marra of “In The Image Of His Glory Ministries“has been given the mandate by the Father to Raise up His Tents Of Meetings, so she goes wherever the Lord directs her to. Susan shares the Father’s Heart to those who are seeking Him, and the Cloud of the Presence of the Lord and the Fire of the Lord often manifests in the meetings, as the Lord meets with the People. The Impartation of the Spirit is released to all who hunger and thirst for the Lord and who desire to be changed. The Lord is seeking those who are willing to draw near to Him. Susan’s blog site is here.

If you like what we're doing:by PayPal
100%Donations will go to support missions and the needy.
See our Donations Page.