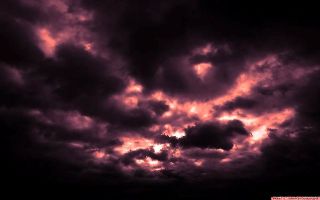 MY VISION OF A RED CLOUD!  Do not be in a hurry to embrace some clouds!!!

True the bible says “WHEN THE CLOUDS ARE FULL THEY EMPTY THEMSELVES ON THE EARTH! Yes, it is so but not all clouds carries the WAVES OF GOD!  We must be discerning enough to know this!!

In 1995, I was shown a thick red cloud.  It seemed beautiful.  As I focused on the cloud, my gaze fell on a a part of it that was broken then from the part I could see through it to another cloud more fiery than this outer cloud.  There were sought of layers and on the first layer I beheld different birds but I realized that all the birds were night birds except for one!

I saw the owl, the bats, but among them was the vulture and it seemed to be their leader.  I was scared because the birds were not their usual sizes but seemed to have been magnified.  Then I realized that their increase in sizes was occasioned by the way men viewed them.

Let me explain this better because now I see this with a better understanding: the night owl I saw was small but every time people gave it attention, it grows in size than its usual.  Its food for growth were the praises of men!

As I looked at the vulture, it was turning its heard to every direction and will make a certain horrifying sound to be heard.  When it stretched its right wing, one of its feather would fall towards the earth and the feather smelt terrible.  Then something unusual happened, the vulture would pass out black watery excrement but this time from the mouth.  It was so irritating to behold.

Gradually some of the birds began to fly out of that broken layer which I had seen.  We live in the times where one MUST be extremely careful the cloud they follow!  For not all clouds are of God!  The clouds of false prophets are every where and there false prophets are growing prominence and ground on the praises and recommendation of men!  They have been introduced out into the world by the king of vultures himself but commended by men themselves.  So they grow fat preying on the resources of the ignorant!

A man was asked to bring a stolen one million dollar note by one of the night owls to be prayed for.  But just before he would prepare to journey to see this night owl, God showed me his feet and told me, he is moving to areas he will never come out from.  I called him and told him what the Lord had showed me.  Then he opened up and admitted that he was planning to come see the night owl in the city of Port Harcourt who asked him to bring the stolen one million dollar note for prayers!

This certainly and definitely isn’t God!  He is a night owl and not a prophet!  No TRUE prophet of God would ask you to steal and bring for prayers!  I told him to return the money and he did without a waste of time!

We need discernment in the church today to know the difference between the vultures and the eagles between TRUE PROPHETS & false prophets!  If you care so much as to know, your commendation of them is the secret of their might!

Author, teacher, motivational and conference speaker, Pastor Mark Cyril is the international President of CYRIL MARK WORLD EVANGELISM – an independent ministry taking the message of the cross across the Nations turning many in their numbers to salvation through Jesus Christ. He is also the Senior Pastor of Revelation Apostolic Community; an apostolic and Prophetic Word based ministry in Abuja the capital city of Nigeria – West Africa.