Shamgar is not a man well known outside the Bible. Indeed, even in the Bible his name is only mentioned twice. The first is in Judges 3:31 where we read:

“And after him was Shamgar the son of Anath, who killed six hundred men of the Philistines with an ox goad. And he also delivered Israel.”

He appears again in Judges 5:6 where we learn more about the catastrophic state of Israel at the time, than about him:

“In the days of Shamgar the son of Anath, in the days of Jael, the highways were empty, and the travelers walked through crooked ways.”

Nevertheless, we know from the introduction of Shamgar that he was a Judge of Israel, following on from Ehud, and the immediate predecessor of Deborah; probably a long-time contemporary of both Deborah and Barak.

Interestingly, Shamgar’s name (sham´gar שׁמגּר ) is not Hebrew, but resembles the name of a Hittite king and the name “Anath,” that of a Syrian goddess, giving rise to the probability that he was of mixed parentage.

Yet whatever his background really was, Shamgar’s claim to fame is clearly stated in Judges 3:31 that he “killed six hundred men of the Philistines with an ox goad“ and in that daring action saved, or delivered, Israel from its enemy. It is as if that last act of “saving Israel,” was added as an afterthought… the traits of a humble and God fearing man.

The question for us is, what precisely is an “Ox Goad“? 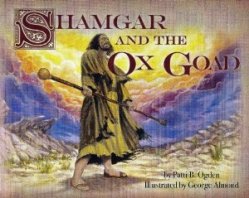 The goad was, and still is, a formidable sharp pointed instrument, sometimes ten feet (3 metres) long and used to goad (to prod or encourage) oxen at work under the plow.

As I recalled yesterday’s Church sermon about Shamgar, I came to see the parallels between Shamgar and Israel’s King David come together in my mind.

Shamgar rose from being a farmer, a tiller of the soil, to being the leader of Israel. David did much the same, from a shepherd boy to God’s own anointed King of Israel.

“And David said to the Philistine, You come to me with a sword and with a spear and with a javelin. But I come to you in the name of Jehovah of Hosts, the God of the armies of Israel, whom you have defied. Jehovah will deliver you into my hand today, and I will strike you and take your head from you and give the bodies of the army of the Philistines to the birds of the air today, and to the wild beasts of the earth, so that all the earth may know that there is a God in Israel.”

I well imagine that Shamgar did the same; for the slaughtering of six hundred Philistines soldiers by one man with a pointed stick, is a mind-boggling achievement which I doubt he could have accomplished in the power of his flesh only.

How was it done? I suggest the answer lies in Zechariah 4:6,

“Then he answered and spoke to me, saying, This is the Word of Jehovah …… saying, Not by might, nor by power, but by My Spirit, says Jehovah of Hosts.”

The question for born-again believers today is this, what is your Ox Goad?

What is it that The LORD has given specifically to you, which can be a weapon in The LORD’s battle with the enemy?

To fight The LORD’s enemy today, He has given us different but appropriate weapons, for as 2 Corinthians 4-6 says:

“… the weapons of our warfare are not fleshly, but mighty through God to the pulling down of strongholds, pulling down imaginations and every high thing that exalts itself against the knowledge of God, and bringing into captivity every thought into the obedience of Christ; and having readiness to avenge all disobedience, when your obedience is fulfilled.”

Similarly, like Shamgar and David, we are not all made the same, as 1 Corinthians 12:29 asks,

“Are all apostles? Are all prophets? Are all teachers? Are all workers of power?”

Now I am not suggesting here that we all become, or can become, new Shamgars or King Davids, but we can all do our part for the Kingdom of God with the gifts and positions with which the Holy Spirit has already endowed us.

But to achieve this, we need to get out of hollow, man-made, Church-borne ritual religion, and into a personal relationship with The LORD Jesus Christ. It is only with a personal relationship with Christ Jesus, that we can fully activate the words of Zechariah 4:6, “Not by might, nor by power, but by My Spirit, says Jehovah of Hosts” and let them come into a reality, right before our eyes.

If you don’t know what your calling is from The LORD, now is the time to ask Him. He will answer, He will let you know.

As born-again Christians, we’ve all been called and all been commissioned, but not all to the same tasks.

What is your sling-shot?

What is your Ox Goad?