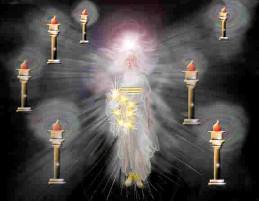 JESUS WALKS AMONG THE CANDLESTICKS.

In the day that the verses I have written below, there was no Internet.  As a matter of fact, there wasn’t even a telephone line, computer, or television.  This was written back then to a people who largely rode horseback, rode in a wagon, or walked.  There were no motor driven cars etc.  They did not have the modern technology we have today, yet the command was to…….  COME YE OUT FROM AMONG THEM AND BE YE SEPARATE.

TIMES HAVE CHANGED, BUT THE WORD OF GOD IS STILL THE SAME.  People have not changed, nor has sin; it has just gotten worse.  Oh I know, Sin is sin, regardless if it was then or now.  Really nothing has changed, ONLY THE THINGS PEOPLE HAVE.

Many think that somehow WE MUST CHANGE WITH THE TIMES and live accordingly.  They say, If they had invented Television back then than the Apostles would have watched it.  Well I HOPE NOT!!!   If they had listened to Jesus, who was their Lord, than they would have walked away from the filth.  I said FILTH.  But you see many think that things modern are OK.  Just because it is modern does not make it OK.  Sin is even exaggerated on the BUB TUBE today, and men just have more to look at.  Sex is easily seen, just turn on the Tube and watch Behind Closed Doors!

THE CHURCH STILL HAS THE VERSES LISTED BELOW TO DEAL WITH THE SAME AS THEY DID IN THE EARLY DAYS.  I will even point out, the verses coming up next were written IN THE NEW COVENANT DAYS TO THE CHURCH AT CORINTH by the APOSTLE PAUL, APOSTLE TO THE GENTILES.  Yes I said Gentiles.  IT WAS WRITTEN TO US.  Now read it…..:

“14 Be ye not unequally yoked together with unbelievers: for what fellowship hath righteousness with unrighteousness? and what communion hath light with darkness?
15 And what concord hath Christ with Belial? or what part hath he that believeth with an infidel?
16 And what agreement hath the temple of God with idols? for ye are the temple of the living God; as God hath said, I will dwell in them, and walk in them; and I will be their God, and they shall be my people.
17 Wherefore come out from among them, and be ye separate, saith the Lord, and touch not the unclean thing; and I will receive you.
18 And will be a Father unto you, and ye shall be my sons and daughters, saith the Lord Almighty” 2 Corinthians 6:14-18 King James Version (KJV).

Oh my…… someone said just look at this teaching. It says… things that many do not like to hear today, in today’s church!

Like it or not, the fact is God has called His Church, His Body, to come out of the world and be separate.

THE CHURCH IS THE CALLED OUT ONES.   That is right.  The scripture says he has CALLED OUT A PEOPLE FOR HIS NAME SAKE  from all the Earth.  It is his plan to have a SEPARATE PEOPLE.  A people who are NOT LIKE THE SINNERS AROUND THEM but a…..

“9 But ye are a chosen generation, a royal priesthood, an holy nation, a peculiar people; that ye should shew forth the praises of him who hath called you out of darkness into his marvellous light;  10 Which in time past were not a people, but are now the people of God: which had not obtained mercy, but now have obtained mercy.
11 Dearly beloved, I beseech you as strangers and pilgrims, abstain from fleshly lusts, which war against the soul; 12 Having your conversation honest among the Gentiles: that, whereas they speak against you as evildoers, they may by your good works, which they shall behold, glorify God in the day of visitation“   1 Peter 2:9-12  King James Version (KJV).

The above verses say that God’s People are to be….

Yes the Bible says HIS CHURCH ARE VERY DIFFERENT (OR SHOULD BE) from the unrighteous lost people living around them.  THIS CLEARLY DEFINES THE KIND OF LOCAL CHURCH WE ARE TO BE.

The Church is UNIVERSAL and to that I will agree, but the CHURCH IS AND ALWAYS WILL BE LOCAL.   In other words, YOU WILL HAVE TO PUT YOUR FEET DOWN SOMEWHERE AND WALK AND TALK FOR JESUS CHRIST.  It is good to be on the Internet, and you can certainly live for Jesus Christ Here, but IN THE DAILY WORLD WE ARE COMMANDED TO LIVE BEFORE THE SINNER AND UNGODLY IN EACH AND EVERY LOCAL CITY AND PLACE IN THIS EARTH.

In the Scripture we read about the….  SEVEN LOCAL CHURCHES…

I could labor this point by adding the Church in Corinth, or the many churches spoken of in Peoples houses… BUT ONE THING IS NOTEWORTHY HERE…  THEY WERE ALL …

LOCAL CHURCHES.  Churches which were in DIFFERENT TOWNS, CITY, PLACES, AND HOUSES.  The were comprised of REAL PEOPLE, IN REAL PLACES.  They did not have a Internet, or Facebook to hang out.  If they had they would be A CHURCH ON THE INTERNET..  but somehow it would be still lacking, because we can not fully see each other or even the People all around us.  There must be an EVEN FURTHER COMING OUT..  YES A COMING OUT…

A COMING OUT IN THE PLACE YOU ARE KNOWN.   STANDING UP IN THE TOWN YOU LIVE IN OR NEIGHBORHOOD OR STATE.  YOU MUST COME OUT OPENLY AND BOLDLY AND BE SEPARATE SAITH THE LORD…  AND MAKE IT A POINT TO NOT TOUCH THE UNCLEAN THINGS…  AND TO SEPARATE UNTO GODLY LIVING IN FRONT OF ALL THE WORLD.

I believe with all my heart that the Bible teaches that we all should be a part of a REAL PEOPLE WHO ARE CALLED OUT IN A LOCAL PLACE.  The place where we are living so all those around us can SEE AND BELIEVE.

The problem today is the Modern Church DOES NOT, IN MANY CASES STAND OUT from the World.  It does NOT SEPARATE ITSELF, but looks like, smells like, acts like, and talks like the world around them.

This lesson is about THE TRUE CHARACTERISTIC THAT GOD WANTS HIS CHURCH BODY TO BE KNOWN AS.  If the true Church is not Local, and does not really exist ON THE GROUND where sinners can watch and see, than HOW CAN WE FULLY SEPARATE FROM THEM…  OPENLY?

Jesus called 12 REAL PEOPLE, who followed a REAL JESUS who was born in a REAL TOWN and took a stand as one born a carpenter by trade.  They were all men of the world called out of where they were….  to congregate together in a REAL SETTING, and to speak openly in REAL PLACES.  They were men and women of God who were in many places.  Separated and Godly, making decisions which caused many of them to be latterly be put to death, persecuted by real people in real places.  They were men and women of great character and life style, bearing in their bodies the marks of Jesus, being literally servants of His.  The gave their Real lives in Real Places so that Living People could see and believe.

A series of teachings by Prophet Ken Dewey concerning what the Bible teaches about the LOCAL CHURCH.  In the Book of Revelation 1:12-20  it says Jesus Christ was walking among the seven golden Candlesticks which  were the seven Churches mentioned in that Chapter.  The Importance of the study of the Candlesticks  or the Local Churches is needed today because many have said there is no longer need for local churches and that it is OK just to belong to the Universal Body of Christ.
What does the Word of God teach concerning a LOCAL CHURCH?

To make a donation to OUT OF THE DESERT MINISTRIES please send to:  PO BOX 223, BELEN, NEW MEXICO, our visit our Donations Page, for PayPal.
PLEASE PRAY ABOUT SENDING A LOVE OFFERING TO SOMEONE WHO IS IN THE MIDST OF THE BATTLE FOR SOULS..  AND TO OPEN BLINDED EYES OF THOSE WHO ARE SLEEPING IN THE BODY OF CHRIST.  WE NEED YOUR HELP TO DO ALL THAT GOD IS SAYING FOR US TO DO.  THANK YOU ALL …