Early this morning, while praying for the on going conflict in The Nations, suddenly I saw in The Realm of The Spirit what I can only describe in earthly terms as a Weather Vane, which was spinning with such great speed that it seemed to be standing still.

I could see something beginning to take place in the heavens that would greatly impact and influence Weather Patterns over The Nations of Europe in the coming days.

In the natural, I saw a strange and fast moving Weather Front suddenly forming, that was heading towards the nation of Ukraine and other bordering nations, and in The Realm of The Spirit, I saw flashes of lightning.

The sound of thunder violently shook the heavens and mighty rushing winds were blowing. Thick clouds began forming in The Realm of The Spirit over The Nations of Europe.

The Spiritual Atmosphere felt very heavy, and a strange sensation of humidity filled the air, as heat began to rise and increase.

The Spiritual Realm over The Nations of Europe felt heavily pregnant with the Sovereign Purposes and Pans of God.

Something was about to break. Something powerful was now being shifted and turned.

I could feel a type of Spiritual Turbulence taking place in the heavens, and like powerful birthing contractions, I could see what looked the very womb of heaven, moving and contracting over The Nations of the Earth.

Then suddenly, I saw a Portal opening up over The Nations of Europe, and a great Light broke forth, piercing a veil of deep darkness that covered the lands. Then came a sound of breaking, and then the sound of mighty Rushing Waters could be heard.

Then I heard these Words, ”Brace! Brace! Batten down the hatches, for Nations have entered into a time of birthing!

For a synergy of the ages is now taking place over the nations! See! For generational cycles are being broken, as Nations are now coming full circle!

For the sound of My Seven Spirits shall go forth to strike and to shake the heavens and bring to birth in the Earth a great Spiritual Awakening that shall Change, Transform and Reform the Nations.

For now, a new Kingdom Era is being made manifest in The Nations of the Earth!”

In reply to a question:

“What do you think to Ezekiel 38 Gog and Magog? Because that’s what I’m “feeling”.
“Gog” is “the chief prince of Meshech and Tubal”. The proper translation is “The Prince of Rosh. Meshech and Tubal!” In Hebrew, the word for chief is “Rosh”. That is also the ancient name for “Russia”. So GOG is The Prince of Rosh, or the president or ruler of Rosh. Simply put. – the President or ruler of Russia.”

Yes! The timeline of God is unfolding, but we must also recognise that Satan is endeavouring to accelerate the timeline to destroy the Harvest.

This is why we are seeing the great upheavals, as we pray let us seek wisdom understanding and discernment of the times so we rightly align.

It concerns me that some are just taking the back-foot, because they hold onto a false hope narrative that says, “Don’t worry, it’s all just going to be fine and everything we desire will be sitting in front of us after the dust settles!” This is being in denial not walking in true discernment.

Unfortunately many in The Body have an “Escapism Mindset”. The LORD is not as concerned about our comfort than he is about our character. The road to The Cross was one of suffering, not satisfaction and comfort.

To truly understand the times, we must recognise that prophetically, Nations are now being separated and sifted.

This should not bring fear, but rather a greater expectation for the greater outpouring of the glory that is to come.

When The Glory comes, Nations will be brought to their knees.

The Times…
“…A severe cold snap could stall Russian advances further, analysts believe, with troops forced either to abandon their vehicles or sit in “40-tonne iron freezers,…Civilians flee Irpin, near Kyiv, as temperatures fall. Wind chill is expected to inflict lows of minus 20C…
…Analysts said that this could make the invasion harder for the Russians, especially those stuck in a 40-mile column of stalled vehicles north of the Ukrainian capital. A Ukrainian military source said: “It will affect those in the long-staying convoys; it means that Russian troops staying alongside the road will freeze…!”

“Eastern Europe impacted by an Extreme Arctic Cold Blast and Snow next week, as the southern lobe of the Polar Vortex heads over Russia“ 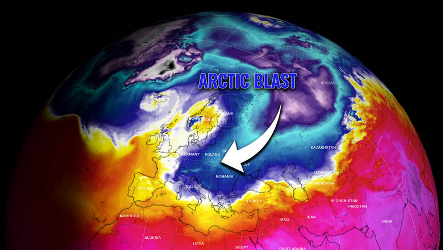 Site: Severe-weather.eu
By: Author Marko Korosec (04/03/2022)
“Thanks to the pattern change developing a powerful high-pressure system over northern Europe, an early March Arctic cold blast with temperatures around -15 °C is forecast to spread into eastern Europe in the coming days. The favorable flipped pattern delivers extremely cold weather and snow also farther west into central and southern Europe next week. This is due to the Polar Vortex southern lobe turning towards Russia and Europe after being parked over the United States and Canada for most of the Winter Season 2021/22.
The European continent has been lacking significant impacts of snow and cold this winter, with more or less mild weather for weeks. Contrary, the weather across the Atlantic was harsh, with a frigid cold over Canada and major winter storms across the U.S. Wondering why? That’s the Polar Vortex above us, which has been unusually strong this year.
And this is now about to change. This weekend, the general weather pattern over Europe is expected to make a significant flip, developing a strong blocking High over western and northern parts of Europe. When this occurs, it opens a corridor for the intrusion of very cold, continental air mass from Arctic Russia into Europe.”