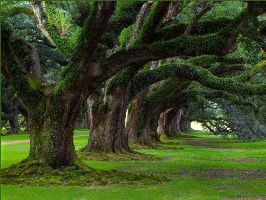 I had a night vision: I walked into a church and there were many people in the church there were two sets of seats divided by an isle. When I walked in I wanted to go to the front but there were all sorts of young people in the front seats and a man came up to me and said that I had to sit in the back now and be behind these young people. I would say they were young adults and teens maybe up to the age of thirty.

All of a sudden one of the young people stood up to sing and it was beyond any sound that I had ever heard. One by one they would stand up and sing and their talent and anointing was beyond worldly. I didn’t understand why I had to take this back seat because I had always sat in about the second row because I never wanted to see what others were doing in front of me. I looked over at the seats that were across the isle and beside of me.

There was a lady that had gone on to be with Jesus many years ago who when she died the Lord had said to me that her death would indicate “The Changing of The Guard” She was a lady that had never missed a prayer group that I led many years ago for 8 or 9 years. If no one else would show up for prayer group she would faithfully be there. I looked at her in this dream and as these young people were using their other worldly gifts, she turned to me and nodded a nod of approval and then smiled as if to say she was pleased!

I knew that she was saying that this is what her generation 80 somethings and my generation 50 somethings had prayed for and that we the 50 somethings had continued what they had begun to pray for but never had seen come to pass but was happening now. I also realized that our place now wasn’t to be so much up front only as teachers that were to back this generation under us. The Lord said that He was going to join these three generations their prayers and labor of the two older generations to bring to pass what we had prayed for for many many years! I also realized that the anointing on this younger generation had become much stronger in anointing than the generation before it!!

He also said that they would have what we desired in this day but had not attained. Not to be jealous of their anointing but know that it was because of our prayers that it was happening. It will seem at times that we had labored and warred over this and that they had just walked into it. But I was reminded of the word about the laborers that got paid the same as the ones that had been their for much longer but that it was OK because we were all accomplishing the same goal. We 50 somethings had just as important of a role to play but we had just changed positions. God said that it will take all of these generations to accomplish this Glory to God!!

God is aligning us in this day with the generation that went before us and the one that is coming up in this hour. We need to glean from that in the past that has caused us to grow and from those that have gained wisdom through walking out their faith. They can help us to excel in growth as we learn from the mistakes and triumphs that they have gone through. We who are older in the Lord can catch the enthusiasm of the youth who are coming up and continue to teach and mentor them in the deeper things of the Lord. The Lord told me that those prayers of the saints that went before us and have not come to pass are still before the throne of God and that as we agree with them that it gives them more power in the earth realm. You are here to continue standing for the promises of many of those that our elders prayed and our parents prayed. God is aligning the generations as never before. Get ready to Shift into your place!!