There is no doubt that the Head of the Church is our Lord and Saviour Jesus Christ.

Indeed, Colossians 1:18a states that ”He is also the head of the body, which is the church.“

Not only this, Colossians 2:10 tells us it is also Jesus “who is the head of every ruler and authority” and I don’t think I have heard anyone in the Church deny this.

As The LORD starts to do new things, some people will “hitch their wagons” to that rising star of new revelation, while others stay with what they know and keep to various degrees of orthodoxy.

That way, I guess, the hands, the feet and the various parts of the Body are populated, with various and appropriate giftings, commitments, strengths and weaknesses, all for the glory of the Body corporate.

“Now if they were all one part, where would the body be? So there are many parts, but one body. The eye cannot say to the hand, “I don’t need you,” or the head to the feet, “I don’t need you.” On the contrary, those parts of the body that seem to be weaker are in fact indispensable, and the parts of the body that we think are less honourable are treated with special honour, and we make our less attractive parts more attractive. However, our attractive parts don’t need this. But God has put the body together and has given special honour to the parts that lack it, so that there might be no disharmony in the body, but that its parts should have the same concern for each other. If one part suffers, every part suffers with it. If one part is praised, every part rejoices with it. Now you are Christ’s body and individual parts of it.”

Regrettably, while some, indeed, perhaps many parts of the human body react as First Corinthians 12:19-27, the body of the Church is not fully blessed with such rationality, thus denominationalism seems to run riot at times, exposing the Church to wiles of the enemy.

I am certain the enemy uses these inter-Church confrontations to his advantage as legalism, the Jezebel spirit and the spirit of religion all take their toll on the Body.

The vitality of the Church body is robbed and in many cases, all that remains is a hollow core, a clanging symbol.

We all seem to get confused when we speak about “the Church”. Typically we interchange the word “Church” to mean 1) the building in which a congregation meets, or 2) the entire body of believers or 3) a congregation of believers.

In First Corinthians 12:28 we read that

“God set some in the church, firstly, apostles; secondly, prophets; thirdly, teachers, then works of power, then gifts of healings, helps, governments, kinds of languages.” Here “church” in Greek (ἐκκλησία) means “ekklēsia” (ek-klay-see’-ah), a calling out, that is, a popular meeting, especially a religious congregation (Jewish synagogue, or Christian community of members on earth or saints in heaven or both): an assembly, a church. (Taken from Strong’s)

A couple of years ago a question arose in me was: who is “head” of the local church? Perhaps what I really meant was: who was in authority over a local congregation? How should the local Church best be structured for the His New Kingdom?

I started to ask around, as to where we (the Church) were at this time. Without exception, the answers were all much the same in principle. Of course, the larger the congregation, the larger and more complicated the chart. In simplistic terms, this is shown in Figure 1 below: 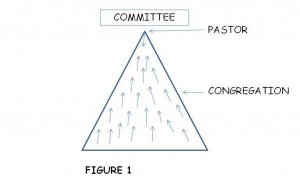 Figure 1 depicts the traditional and certainly the normative Church structure, not unlike that of any secular organisation.

A “Board” of some type, oversees a “Pastor” or leader, who in turn oversees a congregation of believers — a “church”.

The congregation and the pastor are facing each other, just as the Sunday Service where the pulpit speaks to the populous.

This appears to me to be confrontational at the very basis of the interaction, with the Pastor/ Leader “lording” over the congregation — not an unknown occurrence or experience.

Schematically anyway, in Figure 1, no matter where Jesus turns up in the picture as Head of the Church, some of the gathering will have their back to Him. The same is true for God.

There seem to be so many things wrong with this picture and I have not found this answer to be either appealing or appropriate for the Church.

Just because it works in the secular world, is probably good enough justification alone for abandoning it as a model for the Church.

Yesterday The LORD unexpectedly unveiled to me a different approach to the schematic of ‘A New Church Hierarchy’.

The schematic is shown in Figure 2 below: 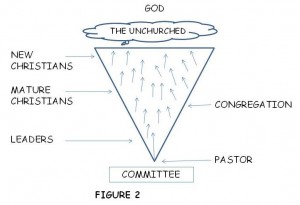 In Figure 2 we are not talking about the Pastor as a leader in the secular sense but in the biblical sense; as Jesus demonstrated for us. He was the ultimate “Servant Leader”.

By definition, Servant Leaders cannot be at the top of an organisational structure. They are at the bottom.

Typically they, the new believers, also know more people and have more contacts, in the unchurched community, as compared to a Pastor, who is surrounded only by believers.

Further, in this fashion, all are facing the same way. As we all look to Jesus we also look toward the unbelievers, the unchurched.

God is, after all, the God of the unchurched too — only they do not know it yet.

Where does the “committee” go in this system? At the very bottom, to ensure the Pastor has all the resources needed to meet the needs of all.

The LORD is very big on Authority and Protocol (doing the right thing, the right way, at the right time).

I believe Figure 2 provides some solutions which we are otherwise missing and meets many of The LORD’s needs and expectations for His Church body.

To have a mental picture which represents how effective Church can be, is one thing; to have it drawn down for discussion is quite another.

Imagine if we were all “on the same page”, working together with a Figure 2 mindset, caring, supporting and nurturing for all those less experienced than us; supporting them in every which way they require. And with all facing the same way, shoulder to shoulder there is no need for face to face confrontations.

If you have a problem, an reaches over from behind you and points forward saying “That way. There is the answer.”

Both have their eyes on the solution and are facing it, the empty cross, the empty tomb and the risen Lord Jesus.

The LORD is doing new things; let us reach out for these new things and let go the old trappings of tradition, of old and worn mindsets. Let us become new wineskins for the new wine which The LORD is now pouring out.

Thanks you Lord for Your words to Your servant . Amen and Amen.