The following article was first published on 4 January 2012 at Apologetics 315
and was authored by Brian Auten.  The original title of the article was
“10 Pitfalls of the Foolish Apologist“

10 Pitfalls of the Foolish Apologist 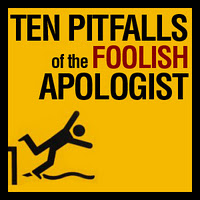 A Christian ambassador desires to be tactful, persuasive, sensitive, and thoughtful.  Being a good apologist and being able to give good reasons for the truth of the Christian view takes prayer, patience, study, and persistence.  For those who have made it their goal to become good defenders of the faith, there are certain positive disciplines and character traits that one would do well to develop.  These help you become a wise apologist.

But on the other hand, there are certain pitfalls that can appear that, when left unchecked, can become character traits and make you a foolish apologist. Although there are surely more, here are Ten Pitfalls of the Foolish Apologist:

1      The foolish apologist speaks before listening. Proverbs 18:13 says, “He who answers before listening – that is his folly and his shame.” Not only does he communicate to others that he couldn’t care less about what they have to say, but he also becomes unable to give a well informed answer.   The wise apologist is patient, seeks to understand, and avoids monologue.

2      The foolish apologist overstates his argument. The foolish apologist doesn’t have “good reasons.”  Instead, he can prove it. He can show something beyond the shadow of a doubt.  His arguments are presented with all confidence — and of course he can’t be wrong. Even when using good arguments, he exaggerates what they actually show. No modesty here, and people balk.  The wise apologist argues confidently, yet with modesty.

3      The foolish apologist wants to win every point.  When the conversation gets complex, he needs to make sure to correct every single error he sees with another person’s view.  Never mind that his conversation partner is getting offended by his “attention to detail.”  This apologist is the fallacy police, the fact-checker, and grammarian all-in-one.  If he makes an error, back-pedaling is in order, with little or no admission of wrong.  The wise apologist can discern what really matters in a conversation.

4      The foolish apologist chases red herrings.  If the topic is the resurrection, just bring up evolution.  The foolish apologist will happily hop down any bunny trail that appears.  The conversation goes in all directions.  He can’t make any progress in an argument because he can’t spot red herrings, distractions, and non-issues.  In fact, he may often enjoy these deviations from focused dialogue, because he’s proud of his expertise in his own pet subject areas. The wise apologist knows how to stick to one point.

5      The foolish apologist is proud of himself.  He likes the fact that he knows terms that make the “novices” around him cock their heads.  He secretly commends himself for reading more books in a month than most people do in a year.  He enjoys the sound of his own voice, and thinks he does a pretty good job in an internet forum.  Apologetics is his tool to show the world he can flex his intellectual muscle.  He’s received his reward.   The wise apologist humbles himself before God, and looks upon himself with sober judgement.

6      The foolish apologist seeks popularity.  He enjoys the accolades of others, speaking to lots of people, being a big name. Name-dropping becomes a normal tool to show others just how connected he is to what’s happening in the scene.  He doesn’t choose the lowly place.   The wise apologist blooms where he is planted.

7      The foolish apologist neglects spiritual disciplines.  He finds reading philosophy more interesting than reading the Bible, so he neglects the Bible. Prayer is seldom and rushed.  In fact, prayer, meditation, Bible study, worship and fellowship take the back seat to study.  The foolish apologist deceives himself that he is being spiritual, all the while drifting away.   The wise apologist sits at the feet of Jesus.

9      The foolish apologist isolates himself from others.  He doesn’t need their input. He doesn’t appreciate correction.  He has his own plans, his own agenda, and own personal ministry.  He refuses to let iron sharpen iron.  When he falls, he has no one to help him up.  He’s accountable to himself only. T he wise apologist surrounds himself with godly counsel and fellow laborers.

10     The foolish apologist doesn’t do apologetics.  He becomes an apologetics junkie; a consumer instead of an enlisted soldier.  He does more talking about defending the faith than actually defending the faith.  Debates are a spectator sport.  He forgets that souls are in the balance and doesn’t even think of preaching the Gospel.  The wise apologist wants to win others to Christ more than anything – and he uses apologetics as a tool to assist in this task.

Have you encountered any of these pitfalls in your own life?  This list may serve as a handy reminder or even serve as a list of prayer points for your own development as a better ambassador for Christ.

*The pronoun “he” is used only for consistency.