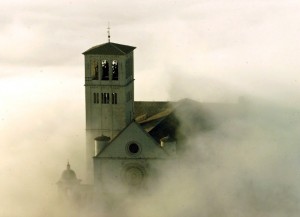 As Wikipedia says “The Prayer of Saint Francis is a Christian prayer. It is attributed to the 13th-century saint Francis of Assisi, although the prayer in its present form cannot be traced back further than 1912, when it was printed in France in French, in a small spiritual magazine called La Clochette (The Little Bell) as an anonymous prayer. The prayer has been known in the United States since 1929, when Cardinal Francis Spellman and Senator Albert W. Hawkes distributed millions of copies of the prayer during and just after World War II.”

The English version of the prayer reads as follows:

O Divine Master,
grant that I may not so much seek to be consoled, as to console;
to be understood, as to understand;
to be loved, as to love.
For it is in giving that we receive.
It is in pardoning that we are pardoned,
and it is in dying that we are born to Eternal Life.
Amen.

Perhaps the original publication of the prayer was submitted anonymously to the French publication La Clochette in 1912.

As The Prayer Guide says “St. Francis was born at Assisi in 1182. After a care free youth, he turned his back on inherited wealth and committed himself to God. Like many early saints, he lived a very simple life of poverty, and in so doing, gained a reputation of being the friend of animals. He established the rule of St Francis, which exists today as the Order of St. Francis, or the Franciscans. He died in 1226, aged 44.

The prayer has many of the biblical truths of what it means to be a Christian – to seek to give, and in so doing, receive blessings; that the Lord’s Prayer asks God to forgive us as we forgive, and that the goal of eternal life can only result from us putting to death our old sinful lives.

Pointers for Prayer : Sometimes Christians are called to turn the world upside down. To bring the exact opposite of what we find in our world. St. Francis’ prayer is a bold one, asking for strength to give of ourselves to meet the needs of others. He recognises that it “is in giving that we receive”, that as we give of ourselves, we receive the peace and blessing of our risen Lord Jesus. We cannot earn eternal life, but that we are pardoned from the sins that block our claim on it.

Think about the situations that you are involved in that require peace, consolation, hope, light and joy. Then, if you’re bold enough, pray the prayer!”