Watch and pray…  For the eye of the serpent spirit is on the emerald jewel in the crown in this hour, for Satan seeks to destroy the destiny of this land.

Watch and pray over the seven jewels in the crown!”

Very early hours of this morning I was woken by The Holy Spirit with a great urgency to pray for Northern Ireland.

As I sat up in my bed and knelt down on my knees, suddenly I was swept up by a weeping Spirit of Intercession that came upon me and I heard The Spirit say, “Watch and pray…  For the eye of the serpent spirit is on emerald jewel in this hour, for satan seeks to destroy the destiny of this land.

Watch and pray over the seven jewels in the crown!”

As I heard those words, I was suddenly taken back into a powerful spirit encounter when the Queen’s speech was televised.

This is where I saw a Crown and seven jewels which reflected a double rainbow over the nation.

The seven colours of the rainbow represented The 7 Spirits of God, and in this encounter, I saw the 7 Jewels in the crown become 7 Eyes which were the 7 eyes of The 7 Spirits that were looking to and fro across the nation.

Then I saw a Silver Sword rising up from within the spinning crown and the silver sword then became a plumbline which was dropped down upon the four nations of the United Kingdom of Great Britain and Northern Ireland.  God began to shift, reorder and realign the nation.

Well, as I was weeping for Northern Ireland, as I said, I was taken back into that powerful vision where I saw again the plumbline which had fallen upon the nation.

But then I saw a dragon/ Leviathan spirit circling the crown and I saw that the eye of Leviathan fixed upon the emerald within the crown.

Now as I looked at this incredible green emerald which was deeply embedded within the crown, suddenly I heard these Words, “My Beloved, now watch and pay close attention!

For the spirit of Leviathan now seeks to steal the emerald jewel from the crown of this nation.  Watch,  for an ancient door now stands before this great nation that leads to Kingdom Reformation and Restoration in this land.”

On hearing those Words, I looked again at the emerald jewel within the crown and I saw a key rising up from within the middle of the crown and immediately when I saw the key, it was the key that I had been shown a couple of weeks ago…(3) 7’s…!

See HKP article:  “The Key of David is Being Released Over the Nations!”

Now as I looked again at the key I heard The Zpirit say, “Watch!  Unity, unity, unity!  The Key of David will unlock the Door of Reformation in this nation.

Watch and pray, for the eye of Leviathan is now upon the emerald jewel in the crown, for the unity of ‘the four’ will release The Key of David that will unlock the ancient Door of Reformation that stands before this nation!”

Now as I stayed watching praying and listening intently, I saw The Key and The Crown begin to spin violently around and a mighty rainbow whirlwind began to form from within The Crown.

Then suddenly an ancient door appeared before me, which stood closed over the nation.  As I looked at the ancient door I saw the Word, “Reformation” engraved upon the mantle of the door.

Then I heard the piercing cries of the dragon spirit go forth across the nation.  I watched the powerful rainbow whirlwind/ 7 spirit whirlwind, which was carrying The Crown Key, move towards the ancient door.

Suddenly I saw The Key became a Golden Sceptre and the sceptre was extended towards the closed door.

Suddenly I heard these Words, “Watch!  For the sceptre of My Favour is now extended towards this nation for such a time as this!”

As those Words were spoken, the ancient Door of Reformation was blown wide open and I heard these words… ”Behold!  Enter in!  For The Key of The House of David will I lay upon his shoulder, that My Judgment and Justice may be established in the nations of the earth!” 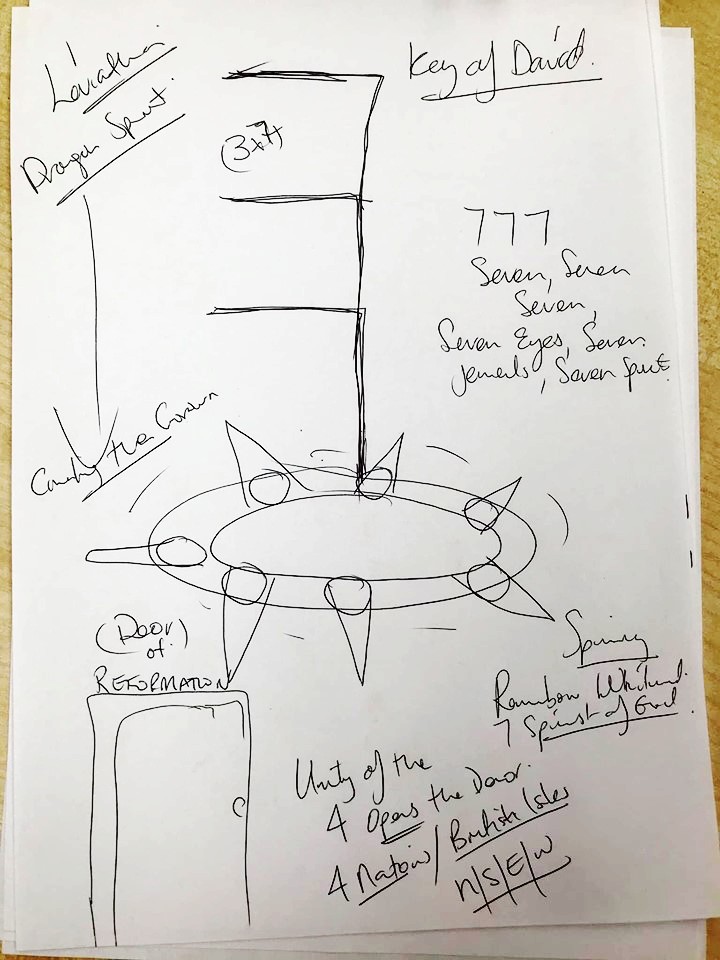 If the emerald jewel is removed from The Crown, the unity of the four is destroyed, then the sceptre of His Favour cannot be extended towards the nation.

The unity of the four/ British Isles, is the key.  Without unity, The Key cannot be released and The Door of Reformation cannot be opened.

The emerald jewel must be protected and preserved, for the 7 Eyes /7 Spirits to be complete, the unity of the four is key to the favour, blessing, authority justice and judgements of the king being extended and established in this land.

Pray fervently!  The eye of Leviathan is on emerald jewel in this hour, as he seeks to destroy the destiny of this land.

Watch and pray over The Crown.