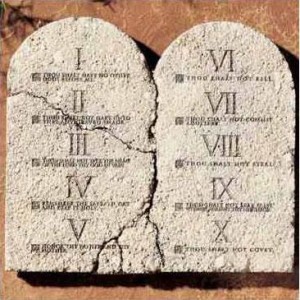 The 10 Commandments comprise certainly one of the best known and most quoted portions of the whole Bible – though perhaps not one of the accurately recalled or most studied.

“The 10 Commandments”, as they are known in Christianity, are known as the “10 Words”, or the Decalogue (Greek: δεκάλογος) in Hebrew (עשרת הדברים) and are universally recognised as having established the moral foundation of both Judaism and Christianity.

We have two versions of the 10 Commandments, which, as the Bible tells us, were written by the finger of God onto two stone tablets and given to Moses ( Exodus 31:18 and Exodus 34:1 ). They are contained in Exodus 20:2-17 and Deuteronomy 5:6-21 and are referred to throughout the rest of the Bible.

Why two versions? Because, as Moses was receiving the first Ten Commandments and the Book of the Covenant from God, the Israelites built a golden calf as an alter for their sacrifices; and upon seeing this, Moses, in his anger, smashed the original stone tablets ( Exodus 32:19 and Exodus 34:1 ). Interestingly, the versions although alike, are not identical.

A study of the Exodus 20 passage above reveals that it actually contains more than ten imperative statements; normally agreed at 14 or 15 depending on nuances, though the Bible itself assigns a count of “10” in the Hebrew. Thus, as the two versions of the 10 Commandments vary, so to do the division in which the two religions and the various denominations divide or parse and group the 10 differently.

Division of the Ten Commandments by religion/denomination

As the illustrative image above shows, the Ten Commandments in Hebrew alone, very easily fit onto one single tablet – be it a tablet of stone as per the Exodus 31:18 description, or on a tablet of clay, as per archaeological sites of that era. The question which has often puzzled me, is why two tablets? Why two tablets if all the words can fit onto one, with space to spare?

The idea of having the 10 Commandments split into 2 portions as per the illustration has also been troubling for theologians, for a split of 1-5 and 6-10 provided a rather inappropriate break. The fifth commandment deals with relations between parents and children – “Honour your father and mother” – rather than establishing a link between the God-man and the man-man laws. A split of 1-4 and 5-10, for 4:6, is equally troubling at it is more arbitrary than balanced. One simply cannot see God doing that, as it is not in keeping with style of the remainder of the rest of the Bible. 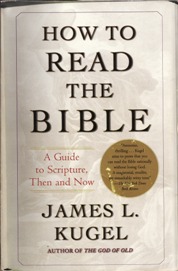 The answer came to me in a book by James L. Kugel entitled “How to Read the Bible

,” a readable 819 page academic tome with both gems and jarring revelations. Like other insights in Kugel’s book, I have waited for independent verification of the veracity of his arguments, information and references, which I now feel comfortable I have received.

Kugel argues with reason, that the Ten Commandments are in fact a form of Suzerain Treaty. What, you may well ask is that? Wikipedia defines it as: ‘Suzerainty’ where a region or people is a tributary to a more powerful entity which controls its foreign affairs while allowing the tributary vassal state some limited domestic autonomy.

The works of William Shakespeare often refer to a “liege lord” who is the Head King among other Kings and these lesser kings owe fidelity (fealty) to their superior; an obligation or engagement to be faithful to a lord, usually sworn to by a vassal. Bible commentaries before the Second World War are mute on this matter, as the archaeological evidence was only unearthed in Hattuša in Turkey, 1906 and evidence publication only began the 1930’s. Hattuša was the location of the capital of the ancient Hittites, who are mentioned 21 times in the Old Testament.

It is interesting to note here that of all archaeological evidence unearthed to date, not one single item has contradicted any item in the Holy Bible. While some of history of the bible lands around the time of the life of Jesus Christ has been in conflict with the Bible, recent archaeological evidence has confirmed the inerrant accuracy of the Bible and the history books have been amended accordingly.

The first and singularly explicit verse of the Ten Commandments says “You shall have no other gods before me.” Judaism at that time was not monotheistic, as this verse confirms, instead, they believed in Monolatry, meaning the devotion to a single deity, while accepting the existence of other deities.

When Biblicists and Theologians began to study the Hattuša publications, they found remarkable similarities between the form of the Ten Commandments and the forms of the writings of the Hattuša excavated materials. It was not that the Hattuša materials were biblical or religious, rather the library of Hattuša was found to contain “ten thousand inscribed clay tablets, many of them dealing with international relations and matters of state.”

Even today, when we write a formal letter or enter into a formal contract, standard or formal forms are used for the documentation, allowing instant recognition of the intent of the document and allowing standard interpretations of the contents. Business letters, wedding invitations, Kingly proclamations, UN resolutions etc. all use acquired standard forms.

So it was with the treaties which the Hittite Kings entered into with vassal or subordinated states around – for at that time, the powerful Hittite empire extended into modern day Syria. Thus, these treaties, known as Suzerain Treaties or Vassal Treaties, all turned out to have the same form and generally contain the following six basic elements in some suitable and apt form:

As Kugel says “what captured the Biblicists, starting in the 1950’s, was the similarity of the forms of these treaties to the form of various presentations of God’s covenant with Israel, including, predominately, the narrative of Exodus 19-20 culminating in the proclamation of the Ten Commandments.” He continues after a line-by-line analysis saying “That was not all. Scholars likewise noted that, after listing the rest of the Ten Commandments and the other laws that follow (Exodus 21-23), the text concludes with the typical acts that serve to seal a covenant in the human sphere elsewhere in the ancient Near East (Exodus 24:3-11).”

If we look at the Ten Commandments in wider view than the limitations of the actual verses we can see that in Deuteronomy 10:2 we find the provision for placing the text of the treaty (Item 4 above) has been met as a direct commandment from God to Moses and that the Blessings and Curses (Item 6 above) are met in Leviticus 26 and Deuteronomy 28, augmented with the public recitation of curses as prescribed specifically in Deuteronomy 27:11-26. Seeing these long lists of curses now as a means to fulfill the conventions of an ancient treaty, does make sense.

Biblical support for Kugel’s views can be found in Hosea 4:1-3 which scholars pinpoint as a telling piece of evidence:

“Hear the Word of Jehovah, sons of Israel. For Jehovah has a quarrel (or a legal case) with the people of the land, because there is no truth, nor mercy, nor knowledge of God in the land.
There is lying, and swearing, and killing, and stealing, and the committing of adultery; and blood touches blood.
Therefore the land shall mourn, and everyone who dwells in it shall droop, with the beasts of the field and with the birds of the heavens. Yes, the fish of the sea shall also be taken away.” (NKJV – parenthesis added)

As Kugel says, “All these instances, scholars said, could leave little doubt: God’s covenant with Israel followed a standardised treaty form, and His demand of exclusive loyalty, that is, monolatry, was nothing more than the translation into the divine sphere of demand that any ancient emperor might have made of His vassal.”

But what of the question of the two copies of the Ten Commandments. Well, given that this was a Suzerain Treaty, and given that both parties to the treaty were entitled to receive a copy, the reason for two copies becomes self evident. The reason both were put in the Ark of the Covenant is also pretty self evident, for as God swears in His own name (Hebrews 6:13), what need does He have with a copy of the Ten Commandments.

The final confirmation that my understanding was correct and the Ten Commandments are in the form of a Suzerain Treaty, came yesterday as I was preparing to start writing. After prayer, the Lord showed me Deuteronomy 7:2b where He speaks to the Israelites saying: “Make no treaty with them, and show them no mercy (NIV)” or “You shall make no covenant with them nor show mercy to them (NKJV).” (Emphasia added in both).

God’s instruction to make no covenant with God’s enemies (the tribes which the Israelites must overcome to take the promise land) continues immediately after the review of the Ten Commandments in Deuteronomy 5. This is followed by Moses’ passionate explanation of the Israelite relationship with God and the Deuteronomy 6 explanation of the greatest commandment and meaning of the covenant relationship with God. Indeed, this is all part of one long divinely focussed speech by Moses, who in Deuteronomy 7 brings it from the legal overview to the explicit saying in vv1-6:

“When Jehovah your God shall bring you into the land where you go to possess it, and has cast out many nations before you, the Hittites, and the Girgashites, and the Amorites, and the Canaanites, and the Perizzites, and the Hivites, and the Jebusites, seven nations greater and mightier than you, and Jehovah your God shall deliver them before you, you shall crush them, completely destroy them. You shall make no covenant with them nor show mercy to them.
Nor shall you make marriages with them. You shall not give your daughter to his son, nor shall you take his daughter to your son. For they will turn away your son from following Me, so that they may serve other gods. So the anger of Jehovah will be kindled against you and will destroy you suddenly.
But you shall deal with them in this way: you shall destroy their altars and break down their images, and cut down their groves and burn their graven images with fire.
For you are a holy people to Jehovah your God. Jehovah your God has chosen you to be a special people to Himself above all people that are upon the face of the earth.”

It is quite clear here in vv1-6 that Moses is explaining the duties of the Israelites under the Ten Commandments Suzerain Treaty format. Moses is telling God’s people what God will do for them, when they do that which He requires of them.

One thing is clear, they must not enter any other covenant, treaty or agreement with any other party, for they are now in formal covenant and treaty agreement, with the Living God.