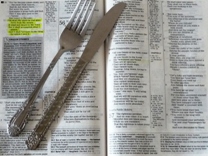 The idea of “eating the Word of God” may seem a little odd to us, but that is precisely what the Apostle John of Patmos did, and he recorded the experience for is. Revelation 10:9-10 explains:

As John records, he was asked by Heaven to go and take a little book from the angel who was standing on both the sea and the land (Revelation 10:8), and then as the angel instructed him, John ate the book.

As he ate the book, it tasted sweet in his mouth, but as soon as he swallowed it and digested it, it became bitter and unsettling in his stomach, exactly as the angel had told him. It is indeed, a perfect example of the use of the word ‘bittersweet.’

The act of eating the little book which John exercised, means receiving the Word of God, with Faith.

As background information, what was this little book? I believe it was the title deed of planet Earth; the same seven-sealed book or scroll which was originally in the hands of the Father (Revelation 5:1) before being transferred to Jesus, the Son of God, to open.

References to eating the Word are also to be found in the Old Testament, where Jeremiah likens the reading and learning of the Word of God, as to eating it:

Jeremiah 15:16 “Your Words were found, and I ate them; and Your Word was to me the joy and gladness of my heart; f or I am called by Your name, O Jehovah, the God of Hosts.”

Ezekiel says much the same thing:

These verses give an indication of what the Word of God is like, or should be like, to the true believer – as sweet as honey!

Proverbs 16:24 says much the same of good words in general, and good words get no better than God’s Words: “Pleasant words are like a honeycomb, sweet to the soul, and health to the bones.”

In Psalm 119, (the longest chapter in the Bible and probably composed by Ezra just after the Temple was rebuilt), the chief subjects are the excellence of God’s laws, and the happiness of those who observe them. So enthusiastic was Ezra, that almost every verse mentions God’s Word. As Psalm 119:103 says:

“How sweet are Your Words to my taste! More than honey to my mouth!”

Why then, if the Word of God is so sweet and so good for us, was it bittersweet, turning bitter John’s stomach? The reason is that the Word of God which John received was ‘judgement,’ and he recognised it. The word was sweet, because the future is indeed sweet, but it was bitter, because he found out that judgement was coming upon the earth.

As demonstrated in Genesis 18:17 where we read “And Jehovah said, Shall I hide from Abraham the thing which I do….,” God does not hide what He is going to do from His friends. Thus, John too saw and understood as we too should, that the sweet words of the Lord about the future are to be offset by the bitterness of the judgement which the Lord was about to lay on the earth.

It is sweet to read the Word of God, and to know that He is victorious in the end, and that He will soon rule on Earth again. It is bitter, however, when we read of the times of tribulation and judgement which are to come upon mankind, before the ultimate sweetness of the end.

The readers of His Kingdom Prophecy come because they have a hunger for God’s word. For many, however, it seems the sweetness of the Word of the Lord has been lost in the lives of those who read and study prophecy – especially bible prophecy. When that happens, the bitterness comes not only in the stomach, but in the mouth too, even during the reading of the prophecy. Perhaps this is why so many are drawn to the Book of Revelation, yet study it in fear and with great concern, not tasting the honey of the Word of God therein.

We need to rekindle the love of the Word of God in all Christians and make Bible-study a main feature in our lives. Then, like John, we may all be able to taste the honey in that scroll, as well as in all the Bible.