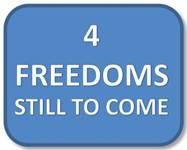 In John 8:31-36 there is for me, one of the most interesting conversations in the Bible. He had been speaking in the temple treasury and teaching in the temple and, as v30 says “As He spoke these words, many believed upon Him.”

‘Then Jesus said to the Jews who believed on Him, “If you continue in My Word, you are My disciples indeed.
And you shall know the truth, and the truth shall make you free.”
They answered Him, We are Abraham’s seed and were never in bondage to anyone. How do you say, “You will be made free?”
Jesus answered them, “Truly, truly, I say to you, Whoever practices sin is the slave of sin. And the slave does not abide in the house forever, but the Son abides forever.
Therefore if the Son shall make you free, you shall be free indeed.” ‘

Bet when we lost dominion over the earth, it was lost to Satan and he has ruled the earth since, not as a king, but as the prince of darkness. In Ephesians, Paul reminds the Ephesians of the reality of personal sin. Like them, we must never forget our past, the condition from which Jesus saved us on the Cross of Calvary. Those memories are the best fuel for our gratitude and thanks to Christ for all he has done in our behalf.

“And He has made you alive, who were once dead in trespasses and sins, in which you once walked according to the course of this world, according to the prince of the power of the air, the spirit that now works in the children of disobedience; among whom we also had our way of life in times past, in the lusts of our flesh, fulfilling the desires of the flesh and of the thoughts, and were by nature the children of wrath, even as others” (Ephesians 2:1-3).

As Christians we often need to be reminded of that from which we have been set free, at least partially, for it is too easy to backslide into the world’s ways – the ways of Satan, the ways of darkness; worldly ways in which the Lord God is not to be found.

I say “at least partially,” because we are still not at the end. We are still a work in progress. Revelation 12:10 attests to this view, saying

“And I heard a great voice saying in Heaven, Now has come the salvation and power and the kingdom of our God, and the authority of His Christ. For the accuser of our brothers [Satan] is cast down, who accused them before our God day and night” (emphasis added).

It is not until the end, that the world will receive its four great heavenly freedoms, freedoms bought by the blood of the lord Jesus Christ. These are four freedoms which we have not yet received. These are freedoms which will not be available, and which cannot come to pass, until the day Christ returns to earth as Messiah, ruler and King.

As Revelation 12:10 clearly says, our salvation is not complete until we are in the presence of The Lord Jesus Christ. Our salvation is consummated by Him, at His timing. As 1 John 3:2 says of this; “Beloved, now we are children of God, and it has not yet been revealed what we shall be. But we know that when He shall be revealed, we shall be like Him, for we shall see Him as He is.” It is a reasonable interpretation of this scripture that this does not happen until Jesus returns to the earth in His full glory.

We can see today that the nations of the world have unlimited power for evil, for the spreading of war and death, but their ability to spread good is limited. The nations have yet to come into their power. The Great Commission of the Lord Jesus Christ was to “disciple nations.” In the year 2000, it was estimated that 1 in 4 of the world population were “Christians,” which ought to equate to 50 countries or nations which are truly “discipled Christian nations.” Most would agree that in truth, there are no discipled Christian nations in the world today – nor are any close to that description. The power in the world today still rests with Satan, the prince of darkness, and has not yet been wrought from his hands.

The Kingdom of God has yet to be established on earth, though for the last 2000 years, the Lord Jesus has made great strides in bring it to a reality, and that day is close. Until the day of Christ’s return, there will not be, nor can there be, Peace, Righteousness or Freedom on this earth; the powers and authorities which rule here will not allow such to take place as they would hasten their own demise.

4) “The Authority of His Christ“

The authority of which the Apostle John write here is the authority (the exousia) of God the Father which Jesus received as the Christ, as the Messiah, as His “Anointed.” This shows that Jesus has not yet taken over the government, the authority of the earth from Satan. Note that Jesus is not building a Kingdom here – the earth is already His Kingdom and He has undisputed ownership over it and own it all, lock, stock and barrel. He has taken the title deed of earth back from Satan and is about to reclaim ownership.

When Jesus returns to earth, there will be judgement upon mankind. These present days are a period, an extended period, when it seems that Jesus, rather than establishing his Government here, is working on warning mankind of the times ahead. The judgement of Jesus is being tempered with mercy at the moment. The signs of this mercy are all around for those who will look to Africa, China and India as countless numbers come to Christ each and every day, as His word returns to Israel, God’s own country and God’s own people.

Whatever happens ahead of us, there is something really wonderful to look forward to :)