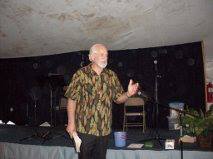 REMAIN STEADFAST, THINGS WILL BET WORSE!!! KEEP ON KEEPING ON!!!

When you look up the Greek word behind the translated English words, “Falling Away,” you will discover the word APOSTASY. A definition taken from Wikipedia, the free encylopedia says…. The term apostasy comes from the Greek word apostasia (“ἀποστασία”) meaning defection, departure, revolt or rebellion. It has been described as “a willful falling away from, or rebellion against, Christianity. Apostasy is the rejection of Christ by one who has been a Christian….”

I want you to be careful to understand that “Apostasy” is in reference to “Professing Christians” who fall away or leave the truth. These people who are departing from ________ are NOT LOST PEOPLE but are those who claim to be part of the Body of Christ. Many talk about the great falling away as if it was the World at large, but I am believing it is speaking about Believers. When we consider this, we know that the Scriptures say that there is coming a day that many Believers…. WILL FALL AWAY INTO APOSTASY.

Now read the Scripture where this comment is stated:

2 Thessalonians 2:3-4 King James Version (KJV) “3 Let no man deceive you by any means: for that day shall not come, except there come a falling away first, and that man of sin be revealed, the son of perdition; 4 Who opposeth and exalteth himself above all that is called God, or that is worshipped; so that he as God sitteth in the temple of God, shewing himself that he is God.”

Not only a Falling Away is warned in this passage of Scripture but I want to point out the SECOND WARNING IN THE SAME VERSE…..

“and that man of sin be revealed, the son of perdition; 4 Who opposeth and exalteth himself above all that is called God, or that is worshipped; so that he as God sitteth in the temple of God, shewing himself that he is God.”

At the time of the GREAT FALLING AWAY than this Scripture warns also that there will BE REVEALED THE SON OF PERDITION… (The Anti-Christ).

Now this is NOTEWORTHY, seeing than many are saying we are already in this Great Falling Away. Well let me again point out THAN WHERE IS THE ANTI-CHRIST? and… IF the Falling Away has began than WHAT ABOUT THOSE PEOPLE WHO ARE TEACHING A RAPTURE AT THE BEGINNING OF THE TRIBULATION??? It is clear to Bible Interpretation that the Anti-Christ does not even come out until Revelation 13 (which incidentally is IN THE MIDDLE OF THE 7 YEAR TRIBULATION).

Well it just does not follow, according to Clear Bible Interpretation, that there is going to be first a falling away of many believers, than a Rapture taking the Christians out of the World. It is clear that AT THE GREAT FALLING AWAY, which will usher in the Anti-Christ does happen in the MIDDLE OF THE TRIBULATION WEEK.

So that is a THORN IN THE SIDE to those who are trying to say there will be a PRE-TRIB RAPTURE. Matter fact it does blow that “THEORIE” out of the water!!!

n. pl. the·o·ries 1. A set of statements or principles devised to explain a group of facts or phenomena, especially one that has been repeatedly tested or is widely accepted and can be used to make predictions about natural phenomena.
2. The branch of a science or art consisting of its explanatory statements, accepted principles, and methods of analysis, as opposed to practice: a fine musician who had never studied theory.
3. A set of theorems that constitute a systematic view of a branch of mathematics.
4. Abstract reasoning; speculation: a decision based on experience rather than theory.
5. A belief or principle that guides action or assists comprehension or judgment: staked out the house on the theory that criminals usually return to the scene of the crime.
6. An assumption based on limited information or knowledge; a conjecture.

Let me be SUMMARIZE here… IS THERE GOING TO BE A RAPTURE? And if so some have MISSED THIS TRUTH. The truth is, There will be a FALLING AWAY during the Tribulation that will usher in the Anti-Christ, WHICH MANY CHRISTIANS HAVE BEEN TOLD …. NOT TO WORRY ABOUT, BECAUSE YOU WILL BE GONE. ?? Now that is serious when it comes to MISTAKES IN TEACHING, wouldn’t you say? Yes, VERY SERIOUS. Because many are NOT EXPECTING to even have to deal with a AC.

Another point I want to point out now is this…

We evidently are to EXPECT A MUCH GREATER …”FALLING AWAY” than we have thought has began. So much around us, in the CHURCH WORLD (Believers in Christ and professing Christendom) is indicating a very great departure from the Faith and from the Word of God already, that many think the time has come. Well I believe we see in the above Scripture the teaching that the APOSTASY WILL BE MUCH WORSE than what we are seeing at this moment. Many today have fallen away from the Truth, for sure, but can we say this falling has fallen as far as the GREAT FALLING AWAY will fall? I believe not. It appears that it will be FAR WORSE THAN FIRST SUSPECTED. I am 70 years old now and have been preaching and called by God to minister to the world the Word of God since I was 17 years old. I have at this moment known there is AN INCREASING DEPARTURE FROM THE FAITH BY MANY. It is growing daily. The facts are alarming for sure, when one reads the newspaper about MANY DENOMINATIONS CHANGING THEIR ONCE HELD BELIEFS. Such as, on the MAJOR DOCTRINES of the Bible, the issue of acceptance of Homosexual Priest and Ministers, Same Sex Marriage, and condoning of OPEN SIN in the Church. Of course there can be much more said about how the present has left the Faith once held and stated in the Scriptures. But sufficient to say at this time is the above.

Now, JUST HOW BAD WILL BE THE GREAT FALLING AWAY? I am told that the deception will be so great that EVEN THE ELECT CAN BE DECEIVED! Far worse than this present hour I believe we are on the DOORSTEP to this Great Depression of the Truth and FALLING AWAY…. yes, of ALL THAT IS WHOLESOME AND RIGHT AND GOOD.

I look at what happened in England to the Churches and the fact that so many there have ceased to even exist and that once great center of the Truth is so dimmed now, that it is not shining.. and the churches have been closed and even given to other things…. I wonder is that what is coming to America? If you think things are bad now, just wait. It will worsen.

There is not a Sunday that does not go by that there seems to be a VERY HARD SPIRIT RISING. I do seance it in the Spirit that the ATTITUDES OF “CHRISTIAN PEOPLE” is becoming less and less attentive to God’s Word and Message. There is a VERY COLD AND INDIFFERENT ATTITUDE SITTING IN . I am constantly aware that it is all but impossible to get any real unity of believers, or EVEN AGREEMENT IN THE FAITH. It is strictly RELIGIOUS AND OF MAN NOW.. that all hope seems to be gone to combined faith and effort. Well I can see a GREAT FALLING FURTHER COMING EVEN YET.

I say we must be warned and prepared for that which will DESTROY GREATLY THE FAITH OF MANY. To me, a minister of many years, is a most sobering message for sure.

I am actually taking some Encouragement from this message, because of the difficulty that I am facing as a Minister of the Gospel. The fact of the knowledge that the Scripture tells me that there WILL BE A WORSE TIME COMING AND A GREAT INDIFFERENCE TO THE WORK AND WORD OF GOD… I am encouraged to not despair, but REMAIN… REMAIN FAITHFUL TO JESUS AND HIS WORD. Watching, always watching. Waiting to see the END and the Coming of Jesus Christ. I HAVE REALIZED THAT ALL IS GOING AS PREDICTED IN THE VERY WORD OF GOD I PREACH. I am strengthened by the knowledge that this was all foretold many hundreds of years ago, and that these days ARE THE VERY INDICATION… .TIME IS SHORT… BEFORE JESUS COMES TO DELIVER HIS TRUE PEOPLE FROM THIS SIN CURSED EARTH.