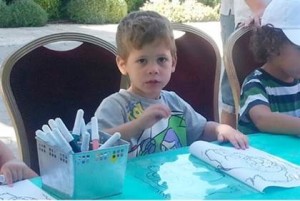 “I do not understand what’s going on at all, sweetie,” Gila stated. “I cannot believe I’m here to say goodbye.”

“We were the happiest family in the world and I do not accept this,” she added. “My Daniel, we want to thank you for teaching us to love, to smile, and for giving us many moments of joy in such a short time. You’re smart, sensitive, beautiful.”

“I find comfort in that you were a child who was loved, and who was happy, until his last moments,” she continued. “We wanted to protect you, but even the ‘code red’ siren did not protect us.”

“God in heaven, strengthen us, give us the strength to continue,” she concluded. “We left you your Spiderman costume you loved so much … we don’t want to say goodbye.”

Four year old Daniel Tragerman was one of the last casualties of the just fought war with Hamas. The eulogy of Daniel’s mother is heartrending.

Of course we all would wish peace to return to all of Israel’s population as a result of the just concluded ceasefire deal by way of Egypt. But this is not the way it is going to be. Peace, like in Europe after the defeat of the Nazis will only come in the way Elisha prophesied to the King of Israel as reported in 2 Kings 13:14-19:

“Elisha had become sick with the illness of which he would die. Then Joash the king of Israel came down to him, and wept over his face, and said, “O my father, my father, the chariots of Israel and their horsemen!” And Elisha said to him, “Take a bow and some arrows.” So he took himself a bow and some arrows. Then he said to the king of Israel, “Put your hand on the bow.” So he put his hand on it, and Elisha put his hands on the king’s hands. And he said, “Open the east window”; and he opened it. Then Elisha said, “Shoot”; and he shot. And he said, “The arrow of the Lord’s deliverance and the arrow of deliverance from Syria; for you must strike the Syrians at Aphek till you have destroyed them.” Then he said, “Take the arrows”; so he took them. And he said to the king of Israel, “Strike the ground”; so he struck three times, and stopped. And the man of God was angry with him, and said, “You should have struck five or six times; then you would have struck Syria till you had destroyed it! But now you will strike Syria only three times.” 2 Kings 13:14-19.

What brought peace to Europe? Endless ceasefires and subsequent endless negotiations? No! You have to win a war to win a peace. This is the lesson of history and for that matter also of the Bible!

There is this story of the prophet Elisha coming to the king of Israel. He says to him to shoot his arrow in the direction of Syria, “The arrow of the Lord’s deliverance.” The king does it three times and the prophet is upset and says to the king of Israel, “You should have struck five or six times; then you would have struck till you had destroyed it.” (2 King 13:19)

This then is the lesson of history – it was only after the allied forces came to Berlin and conquered the Nazi system, with all its evil, that peace came and reigned over Europe for over fifty years.

When Shimon Peres quips, “peace you make with enemies” he forgets this lesson that Europe, which he so admires and wants to be the example for a new Middle East, has peace today not because we negotiated with our enemies but because the Allies won the war!

Therefore when Shimon Peres quips, making the seemingly true – but highly deceptive – statement that “Peace one makes with one’s enemies,” he in fact is making a historical blunder.

Throughout history, peace has been made with conquered enemies OR with enemies who underwent a change of heart and mind, and were therefore willing to live in peace with their former foes. But none of this is true insofar as virtually all of Israel’s present enemies are concerned. They have never been truly defeated and they have shown no change of heart. They are eaten up by an all-consuming hatred for little Israel!

Just as the Nazis were soundly defeated by the Allied forces, so Israel’s enemies need to be defeated before there is even a chance of living in peace with them!

And this is precisely what God repeatedly spells out in the Tanach throughout Israel’s history: Do not make an alliance or a peace treaty with those who have shown again and again that they are your sworn enemies.

And yet this has been Israel’s modern history through the outcome of the suicidal foolishness of OSLO, when Israel’s leaders made “peace” with the instigator of all terrorism, Yasser Arafat – trusting him enough to give him guns and weapons to guard this lie – a peace that never was his intention nor that of his Palestinians.

For this treaty Arafat, together with those Israeli leaders, was awarded the Nobel Prize for Peace in Oslo!!

This, then, is the end result, as Israel has sadly and bloodily experienced in all the years that followed OSLO: death and destruction and the breaking of all promises made to Israel by Arafat and the Palestinian leadership.

Even contemporary history abundantly bears out the truth of this, God’s wisdom. Churchill, not Chamberlain, became the instrument that secured peace for Europe through the total defeat of Nazism. For where Chamberlain’s way was a treaty with Adolf Hitler that was full of holes, Churchill’s was to bring a complete victory over the evil of the Nazi’s philosophy.

May peace then come to Israel these days, not in man’s way, but in God’s way as expressed in the ancient – but still true and appropriate – words of the Psalmist:

“A Song. A Psalm of Asaph. Do not keep silent, O God! Do not hold Your peace, and do not be still, O God! For behold, Your enemies make a tumult; and those who hate You have lifted up their head. They have taken crafty counsel against Your people, and consulted together against Your sheltered ones. They have said, “Come, and let us cut them off from being a nation, that the name of Israel may be remembered no more.” For they have consulted together with one consent; they form a confederacy against You: The tents of Edom and the Ishmaelites; Moab and the Hagrites; Gebal, Ammon, and Amalek; Philistia with the inhabitants of Tyre; Assyria also has joined with them; they have helped the children of Lot. Selah

Deal with them as with Midian, as with Sisera, as with Jabin at the Brook Kishon, who perished at En Dor, who became as refuse on the earth. Make their nobles like Oreb and like Zeeb, yes, all their princes like Zebah and Zalmunna, who said, “Let us take for ourselves the pastures of God for a possession.” O my God, make them like the whirling dust, like the chaff before the wind! As the fire burns the woods, and as the flame sets the mountains on fire, so pursue them with Your tempest, and frighten them with Your storm. Fill their faces with shame, that they may seek Your name, O Lord. Let them be confounded and dismayed forever; yes, let them be put to shame and perish, that they may know that You, whose name alone is the Lord, are the Most High over all the earth”Psalm 83.

And if there has to be a war it is better to have it now before our enemies have the nuclear and other weapons of mass destruction, rather than later when the human toll will be unbearable.

May G-d help Israel therefore next time, if she has to fight another war, not just to win another battle or another ceasefire, but may God, also in answer to our prayers, cause Israel to win this war so that peace can come to this region!

To support this work, please make your checks payable to the International Christian Zionist Center – USA and mail them to our address below, or you can make a cash transfer to the ICZC-USA bank account in Israel:

I thank everyone of you who by his prayers and support is helping us to continue to be a voice for lonely Israel.