Several years ago Casting Crowns released a song that spoke of an issue occurring in our nation. The name of the song, “Slow Fade,” shows how people, families and communities are not destroyed overnight. Rather, they slowly slip away under the weight of sin. These lyrics provide the framework, not of what could happen, but of what is happening right before our eyes. While sin began to slip into the church many generations ago, it is increasing and the church is falling.

Some say that the (true) church is giving undue attention to a few specific sins while turning a blind eye on others. Certainly there is some merit to this position. More than 50% of marriages end in divorce both outside and inside the church. Fornication and adultery are rampant in and outside the church. Idolatry is pervasive and generally acceptable. Violence is rising across our nation and our planet. The list goes on and it serves to prove one very important point. Apart from Christ all things are degrading. Apart from Him we have only “what seems right to a man” to guide us. Apart from Him we are held firmly in the grasp of sin and this world’s system.

Yet certain sins are written into the law of the land and as such the judgment for them is not only personal, it is national. No church or politician is actively endorsing adultery. They aren’t pushing through laws to promote violence. So while certain sins are common, they are not becoming laws of the land.

Homosexuality is no longer just a law of the land (at least 25 states have legalized same sex marriage) It is becoming the next sin to make its way into the church. The difference between this sin and so many others (like our nationalized sin of abortion) is that those who are engaged in it are looking to have its condemnation erased from scripture and declared as moral and upright. They wish to see the homosexual lifestyle assimilated and endorsed by the church. As times goes on these who are pushing the agenda are seeing increasing measures of success. As depicted on the banner in front of this church, the sin of homosexuality is not just being tolerated. It is being embraced. 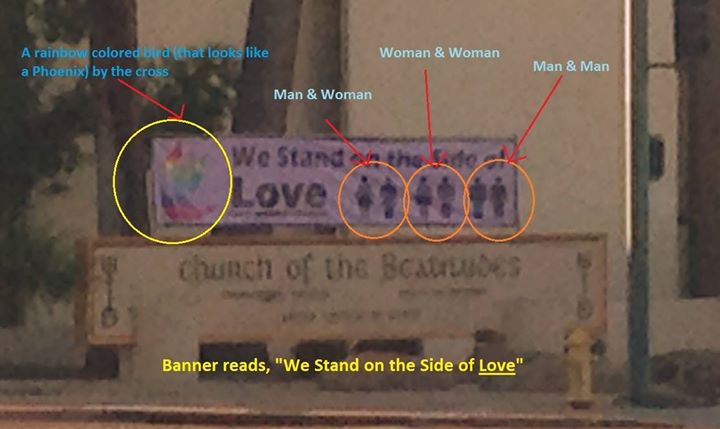 I took this picture of a sizable Phoenix church which is making their position clear.

Surely there are many reasons this could be happening. Yet there are a few very unpopular answers that are at the heart of it all. The first reason is money. The physical church (four walls and a steeple) requires funding. Acceptance of the homosexual agenda means greater funds to support the brick and mortar establishment. As such pastors are being lured into ignoring a few key scriptures for the sake of their financial well being. The second reason is fear. Over the past few decades the church’s focus has shifted from being separate (holy) to being relevant. Now the church is so concerned with being inclusive that tolerance is winning out over truth. Added political pressure will force churches off the fence and into a position. This is not to mention the selfishness and the deception of a church that is willing to step outside the truth for the sake of promoting peace. The holy is being mingled with the profane and when the two are combined it is the profane which wins out.

A few years ago I produced a video series called, “Signs of the Times.” In the first video I ask a question, “If I get a bottle of pure water and add just a couple drops of anti-freeze to it is it still safe to drink?” “After all, it’s mostly water, right?” As we all know, just a few drops of poison (the profane) denatures the pure (holy). While I won’t die from drinking a bottle of water with a couple of drops of anti-freeze in it, if I drink enough bottles of this poisoned water over a prolonged period of time it will eventually make me ill or even kill me.

The enemy understands this principle all too well. He knows that he can’t simply feed God’s people pure anti-freeze (yet). He must slowly progress. It starts with a few drops of poison added to a bottle of water. Then a few more are added and so on until the church is sick and dying. Patiently and methodically he stands with his dropper. Each drop is another step towards his ultimate goal of destruction. After years of exposure to popular culture it is becoming clear that he’s winning this battle. We are becoming increasingly desensitized. It takes a much greater “shock value” to abhor us. We are giving up ground and most are not even putting up a fight. Thus is our plight.

Meanwhile there is another aspect being employed by the enemy at a national level. It is a tactic to subvert the first amendment and therefore destroy the constitution. This destruction comes from just two words, “hate speech.” It would seem that a law to prohibit speaking or acting hatefully is good. Yet when the use of this law infringes upon the constitution that so many have fought and died for, it is dangerous. Preachers are being bound and gagged by the law and many are going along with it for fear of what may happen otherwise. They omit certain truths for the sake of peace.

In a recent story from Houston, Texas, Annise Parker, the mayor of Houston and an openly practicing lesbian, subpoenaed the records of five Houston area pastors. The tool which enabled such an outrageous act is in fact one and the same. It seems that speaking the words of the Bible can be labeled as such. So when God says in Leviticus 18 that one should not lie with a man as they would a woman because it is detestable, that could be labeled as hate speech. If that weren’t enough, Leviticus 20 outlines the consequences for such actions. “They must be put to death and their blood will be on their own heads.”

So simply reading the law as it was handed down to Moses can now be labeled as hateful and although many churches claim that the Bible is the “inerrant word of God,” they are going to be forced to make a choice. To persist in their position could result in the loss of their favorable tax status. Eventually it will lead civil suits and finally to criminal charges. Preachers will be dragged from their pulpits and criminally charged should they remain true to the words of the Bible.

In this season and in this nation it could be said that the handwriting is on the wall. As wickedness increases across the face of the earth light will not only be more distinguishable, it will be increasingly intolerable. We who are in Christ remain in this world and yet we are called to be set apart from it. So when called to compromise the word of God to make peace with the world we know we cannot. For while we have all fallen short of God’s perfect word (creating our need for a Savior) God’s word has not fallen short. It remains inerrant and for those who believe this we know that every last word written will be accomplished. Every prophetic word will come to pass. In this season it is even easier to have faith because it is coming to pass right before our eyes.

Mitch Salmon is a follower of Jesus Christ and proclaimer of the Good News – The Gospel of Christ Jesus!