I felt led to share this chapter from my book “We Need To Start Somewhere” at this time: 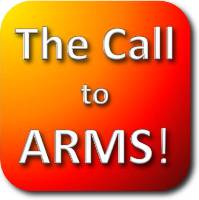 “Most likely, every Blood-bought believer in Christ will come to the place he needs to be where he will be willing to lay down every weight and entanglement with the world, and be ready to pick up his battle arms, and really begin to fight the enemy (Hebrews 12:1). No more allowing the distractions of the world to cause him to have cold, disinterested, nonchalant, and uncaring attitudes toward what is happening all around him.

The enemy is on a rampage; out to destroy and hinder all the work the Lord has begun in His kingdom. Every new believer in Christ is being attacked right and left. Many of the over-comers are being grievously slaughtered. All because the true intercessors have not picked up their arms to fight for the wounded.

I am not saying there aren’t the faithful few who have remained committed to their call no matter what. But I am admonishing those who have a calling to be intercessors, yet have allowed the enemy to bring them to the place of not just defeat, but of not even beginning to fight. The enemy knows these precious ones are a threat to his Kingdom. That is why he is constantly bombarding them, trying to keep them from coming to their place in the Lord where they are able to stand against him. I am persuaded that they are a might army, and that their time is coming where they will stand bold and unwavering, with head set like flint, against the evil one (Ezekiel 3:9).

Although it may appear that this camp of saints is defeated, the Lord is in control. He has them where they need to be at this point. They are going through a period of training that might be one of the hardest things they have ever faced. Yes, the evil one has come in like a flood at every angle, but they are being preserved and strengthened. And yes, like a mighty oak tree, through every storm they face, their roots are going deeper and deeper into the nourishment of the Word of the Lord (Psalm 1:3).

Yes, they are going through many tests and mighty onslaughts, but they are being prepared for war as never before. So, do not be discouraged if you feel you haven’t been able to stand and take your place in the army of the Lord at this point. The Lord has you in the palm of His hand, and you are precious to Him. Faithful are those who will not give up in spite of all their apparent weaknesses. Only when they accept that they are weak can they truly be strong in Him (2 Corinthians 12:10). That is when great strength comes.

Many have fallen away because they have looked in the natural at the fruit of their life at this point. They have thrown up their hands and said that they can’t go on; that there is no hope of ever reaching the place they need to be in Him. Don’t let that be you. Don’t give up! Stand on God’s promises that He who has begun a good work in you will complete it (Philemon 1:6), and He who is in you is greater than he who is in the world (1 John 4:4).

Pick yourself up and brush yourself off and equip yourself with the armor of God (Ephesians 6:11). Sharpen your sword and place your shield where it needs to be. Be clean. For the Blood of Christ washes you of all your impurities (1 John 1:7-9). Look to the righteousness of Christ, not to your own (Titus 3:5, Philemon 3:9). Draw close to Him and be willing for Him to transform you (Romans 12:2). Do not be defeated for the Lord thy God is with you. Don’t allow yourself to become robbed any longer.

Today is a new day. Let the past melt away and let today become a new beginning for you – a fresh new start. Let this year be one of the most overcoming years in the Lord that you have ever experienced. Fulfill your destiny in Him. Go from glory to glory as you reach out for renewed strength from God’s Spirit each day. Put on the Lord Jesus for He is your Captain (Hebrews 2:10, NKJV). Stand in rank, follow Him, for you are more than a conqueror in Him (Romans 8:37). The nations are your inheritance. You will stand undefeated in Him.

All things work together for good to those who love God, to those who are the called according to His purpose (Romans 8:28). So, don’t let your circumstances defeat you; they are for your good. The fire from your trials is purging all traces of dross and impurity out of you. Allow the Lord to do this work in you. Don’t draw back when the fire looks severe. You will not be burned by it. Always remember Shadrach, Meschach, and Abed-Nego (Daniel 3:26-27). The Lord Jesus was right there with them and delivered them completely unharmed but totally transformed.

Be faithful to His Word by allowing it to do its work in you. Be transformed into His image daily (Romans 8:29). As you go from glory to glory, your flesh is being stripped off, and His glorious radiance is being poured out through you to touch a lost and dying world: those who truly need the Lord Jesus (2 Corinthians 3:18). So, be assured this day that the Word is working mightily in you (Colossians 1:29). And, no matter how you feel about your progress in Him, the Lord is pleased with you. Everything is in His timing, and He is in complete control of your life.

So, rest in Him and be refreshed for the Lord is about to bring you through a mighty and conquering battle. The victory is the Lord’s!”

Yolanda Ballard of At The Father’s Feet website shares with you, the body of Christ, the words she’s received quietly sitting at the Father’s feet. I believe Jesus set the example for us to follow. Whenever He could He would come apart from the busyness of the world so that He could quiet Himself before the Father, for that is where He received direction and strength to carry out His will.