“9 Then one of the seven angels who had the seven bowls filled with the seven last plagues came to me and talked with me, saying, “Come, I will show you the bride, the Lamb’s wife.” 10 And he carried me away in the Spirit to a great and high mountain, and showed me the great city, the holy Jerusalem, descending out of heaven from God, 11 having the glory of God. Her light was like a most precious stone, like a jasper stone, clear as crystal. 12 Also she had a great and high wall with twelve gates, and twelve angels at the gates, and names written on them, which are the names of the twelve tribes of the children of Israel: 13 three gates on the east, three gates on the north, three gates on the south, and three gates on the west. 14 Now the wall of the city had twelve foundations, and on them were the names[d] of the twelve apostles of the Lamb. 15 And he who talked with me had a gold reed to measure the city, its gates, and its wall. 16 The city is laid out as a square; its length is as great as its breadth. And he measured the city with the reed: twelve thousand furlongs. Its length, breadth, and height are equal. 17 Then he measured its wall: one hundred and forty-four cubits, according to the measure of a man, that is, of an angel. 18 The construction of its wall was of jasper; and the city was pure gold, like clear glass” Revelation 21:9-18.

As we can see, the foundational stones that make up the walls of the new city are beautiful and precious in appearance.

God chose not to skimp on these stones, but wanted them to be among the most beautiful and magnificent in appearance.

I find it very amazing that both the twelve tribes of Israel and the twelve apostles are both to be found among the walls and the gates of this city.

As we know, a gate is very important for one who would enter into this city. One cannot enter through these gates if any evil is found within them.

Outside are the dogs and sorcerers and the sexually immoral and murderers and idolaters, and everyone who loves and practices falsehood. Revelation 22:15.

We are also told that each gate was to be made up of a single pearl. Again, we see the beauty and extravagance of the Father in how this material is chosen in the construction.

“45 Again, the kingdom of heaven is like unto a merchant man, seeking goodly pearls: 46 Who, when he had found one pearl of great price, went and sold all that he had, and bought it” Matthew 12:45-46.

We are told not to seek treasures in this life where moth and rust will destroy them, but as we can see, God has chosen to build this city with the finest of gems, and the richest of materials.

And each of the materials used in the construction of this New Jerusalem has a divine purpose and reason to be used where it is.

“And the foundations of the wall of the city were garnished with all manner of precious stones The first foundation was jasper; the second, sapphire; the third, a chalcedony; the fourth, an emerald; the fifth, sardonyx; the sixth, sardius; the seventh, chrysolite; the eighth, beryl; the ninth, a topaz; the tenth, a chrysoprasus; the eleventh, a jacinth; the twelfth, an amethyst. And the twelve gates were twelve pearls; every several gate was of one pearl: and the street of the city was pure gold, as it were transparent glass,” Revelation 21:19-21.

Jasper which is the first stone in this foundation, is typically a red stone but it is also seen in green and yellowish hues. Jasper” comes from the Greek word iaspis which is derived from the Hebrew word yashepheh coming from a root word meaning “to polish”.

The second stone used in the foundational walls is sapphire. The sapphire we see today is usually of a dark bluish tone that gets its color from iron and titanium.

In ancient times the sapphire was known as jacinth, and was not known as we know of it today until the Roman Empire around 300 B.C.

Chalcedony is the third stone used in the construction of the wall. Chalcedony was used in biblical times in the carving of seals, signet rings, beads, bowls, goblets, glasses, and other household objects.

Chalcedony is a cryptocrystalline which is a stone that is made up of very tiny crystals which cannot even be seen under a microscope.

Emeralds make up the fourth stone in the foundation. Emeralds were known in bible times in many of the mines which were located near the Red Sea in Egypt.

These mines were later known as Cleopatra’s mines, because the queen used them to enhance her beauty. The word emerald comes from the Greek word smaragdos, which through the French word esmeralde and simply means “green gemstone.

The stone Sardonyx, which is the fifth stone in the foundation, is actually a fine-grained quartz that has alternating bands of reddish-brown and white.

Many cameos were made by this stone and were used by the Romans and others. Josephus the Jewish historian indicates this stone was used for the shoulder pieces of the ephod.

Sardius is also known as carnalian, has been found in the excavations of ancient tombs of royalty. The stone itself is translucent and was hard-grained and orangish-red quartz that was used in ring and wax seals.

A beautiful string of carnalian stones was found in a tomb dating back to 3100 B.C in Egypt. It is the sixth stone in the foundation.

The stone Chrysolite, which is the seventh stone used in the foundation, literally means “transparent” in Hebrew. This stone is one of the most common one found in the world, and is a typically colorless, transparent, coarse crystalline quartz.

Beryl is the eighth stone, and was described by Pliny the Elder in 23-79 AD, who was a historian at the time of the writing of Revelation, as, “The lapidaries cut all beryls of a hexagonal form because the color… is heightened by reflections resulting from the angles. The most esteemed beryls are those which in color resemble the pure green of the sea.”

The ninth stone Topaz comes from the Greek word topazion, named for the island, Topazios, which is located in the Red Sea off the coast of Egypt.

The gem that was mined on this island is actually the stone crystallite of today. The term chrusolithos literally means ”gold stone” and very likely refers to the yellow topaz of today.

The tenth, stone chrysoprasus, is a variety of chalcedony, and is a translucent grassy green or apple color. The word chrysoprasus comes from the Greek word chrusoprasos and literally translated is chrusos meaning “golden” and prason meaning “a leek” indicating the color of the stone.

Jacinth, the eleventh stone used in the foundation of the New Jerusalem, is usually blue in color. Pliny the Elder describes this stone as “being very different amethystus, “though partaking of a color that closely’ borders upon it” and as being of a more diluted violet, It is held that the jacinth/ hyacinth may actually be the sapphire of today. 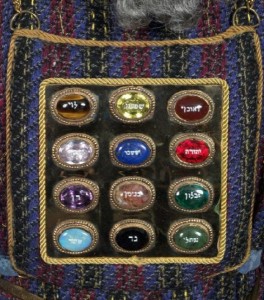 The very last and final layer of the foundation is made up of amethyst. Amethyst is actually a variety of quartz that is known for its rich violet-purple color. It is known that the color of the stone comes from the iron and this is what produces the beautiful purplish hue.

Amethyst is the third stone in the third row of the High Priest’s breastplate (Exodus 28:19) and the twelfth stone listed in the foundation of the New Jerusalem (Revelation. 21:20). The Hebrew word for amethyst is ahlamah which means “dream stone.”

Now that we have discussed the stones that make up the foundation of the walls of the New Jerusalem, we need to know that we also are part of this that is being built through these living stones spiritually.

“You yourselves like living stones are being built up as a spiritual house, to be a holy priesthood, to offer spiritual sacrifices acceptable to God through Jesus Christ” 1 Peter 2:5 (ESV).

For we are living stones as we all “fit together” into this spiritual building that is in the process of being constructed. As we look upon various buildings which are made of stone, we can see how important it is how the stones fit together and that they are snug and tight in this design.

We as living stones, as people, can’t fit together quite as precisely as an actual stone or brick might. There must be flex and bending in the design, to enable freedom and allowance for ourselves.

But if we consider how the walls of our body are made up of various molecules and minute atoms, we see the ability for the walls that outline our various organs and notice that air and blood is able to penetrate these walls.

In the same way, we as living stones weave together a living breathing building that is continually under construction. That living building, a spiritual house, will finally come unto completion, and then we will also see the beauty, very much like the elegant stones that make up the walls of the city of the New Jerusalem.

Stephen Hanson of In His Truth Ministries came to the LORD is a special way in 1975 and has prophesied regularly since. In these end-time birthing pangs we are reminded that judgment must first begin with the household of God. Will we be prepared and ready?