↓
Home→Prophecy→FROM OBSCURITY TO PLATFORMS OF GRACE AND GLORY 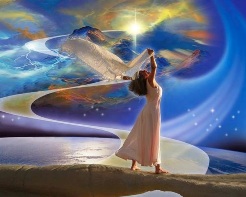 In a night vision I was in a great theater. Many people were sitting in a balcony that was wrapped around the whole top part of a great theater. The balcony was very obscure and dim. The people were very peasantish looking. We were looking at a great stage and there were royal blue curtains covering the stage as if someone was about to take there place on the stage. Some great person possibly.

Suddenly, as we waited on this person to take their place on the stage, the people in the balcony started to rise up out of their seats the peasantish looking people began to rise up out of their seats and make their way down to the stage because who they were waiting for did not come out from behind the blue curtains. All at once the people that were making their way to the exits out of this obscure place seemed as if they were drunk like they had been drinking wine. I was sitting there in the dream and a man was sitting next to me and as I watched the people began to start to do things that they had been created to do,this man next to me looked at me and I instantly knew that he was sharing with me that we all now had the finances and the platform to do all that God had been preparing us for while we were hidden from the world.

I looked up and in the front row of the rows of balcony seats was a famous prophetic person in the body of Christ. They rose up and began to make their way to the back row. I knew this person had raised up other prophets under them and was now taking a back seat if you will to those that had been hidden but that they would play another role of support with the hidden ones. They looked at me and by that time I was intoxicated too and I just knew that this person would keep a watchful eye on us. There was a man sitting beside me, another hidden one. I knew in real life that he had many gifts and talents but had not been able to use them for many years to the full degree that God wanted for him. He suddenly rose up and began to preach with the anointing and gifts and talents with such power that it was changing those around him. Oohs and ahhs began to come from those watching this and listening to him. Others were doing the same thing. They were all doing something that they had not done either for a long time or had ever done as they milled about on the dim balcony making their way toward the stage with the blue velvet curtains.

Next there were three people before me who I knew had major issues in the mind area so that they could not function correctly in the body of Christ and they had continued in their confusion for many years in what seemed to be a vicious cycle. I walked up to them and told them that God wanted to heal them and as I did the next thing I knew they were standing in another part of the building that was much brighter and were well and whole! All throughout this dream God kept speaking the words, “They are going to go from obscurity to platforms of grace and glory!“

The Lord is saying, “I am getting ready to pour out the new wine upon those that have been in hiddenness and obscurity and cause them to awaken to the thing that I have been preparing them to do in their time of being in the cocoon of My forming process. They will be so intoxicated with this new wine that they will just begin as on the day of Pentecost to speak, sing, work, dance, heal the sick, set the captives free and do what they were being prepared for all of this time. Suddenly great boldness will come on the timid and they will speak great sermons as in the days of the great revivalists of their day! They will not be imitators of those that they see and mimic but the genuine will come forth with the anointing that I have given them and the talents that I have given them. They will not want another’s anointing because theirs will be so unique that they will shout for joy that they are finally in their places that I called them to before the foundation of the world! This will cause joy in the camp because as they begin to function as I created them. I will just naturally feed and clothe them as I do the sparrow! This will not be a struggle for them because they are doing what the Creator created them to do!

They are about to come forth and I will place them on platforms where my glory that has been dormant in them will be seen and heard and felt by everyone that looks upon them! They will see me and not them! Many will begin to preach the grace of God from these platforms because they have known my great grace in their wilderness experience! They will know that I Am the God who paid the price for their freedom and now they will preach this great grace to the captives and a great harvest of souls will come forth!! Many of those that hear this message will be healed of years of abusive situations that they have endured from drug addiction and spousal abuse, child abuse, pornography, sickness and many other things!

Yes, my “Hidden Ones” are about to come forth onto the platform with the “Royal Blue Curtain!” The one man show is over! Many are now going to network with other ministries because I have humbled them and brought them to a place that they realize that they have need of every part of the body even those that have a different way and look about them! My Hidden Ones are coming forth as not a one man show, but they will come forth onto the stage in this hour as royal sons and daughters of the King bringing the good news from another land!! Yes, I am bringing them OUT OF OBSCURITY AND ONTO PLATFORMS OF GRACE AND GLORY. Take your seat because they are about to be revealed and they will be intoxicated with the new wine of my Spirit!”

Acts 2:13-21 “Others mocking said, These men are full of new wine. But Peter, standing up with the eleven, lifted up his voice, and said unto them, Ye men of Judaea, and all ye that dwell at Jerusalem, be this known unto you, and hearken to my words: For these are not drunken, as ye suppose, seeing it is but the third hour of the day. But this is that which was spoken by the prophet Joel; And it shall come to pass in the last days, saith God, I will pour out of my Spirit upon all flesh: and your sons and your daughters shall prophesy, and your young men shall see visions, and your old men shall dream dreams: And on my servants and on my handmaidens I will pour out in those days of my Spirit; and they shall prophesy: And I will shew wonders in heaven above, and signs in the earth beneath; blood, and fire, and vapour of smoke. The sun shall be turned into darkness, and the moon into blood, before the great and notable day of the Lord come: And it shall come to pass, that whosoever shall call on the name of the Lord shall be saved.”