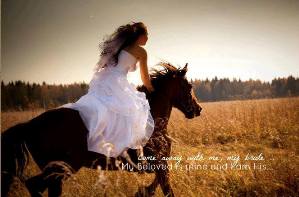 I am like a magnet for religious people to attack sometimes. LOL!! Tonight when I was in the Walmart, a young man that Doug and I both know here in town walks up to me and asked, “What have you been up to?” I said that Doug and I had been doing ministry and I had been preaching, to which he says to me, “Well I do not believe in women preachers.” I am thinking “well just because you do not believe in them, doesn’t mean they don’t exist!”

The Bible says that we should all preach the Gospel! No matter what gift you have, use it to proclaim the word of God!! Over many years of finding my way through the religious world and literally having people stand up in the middle of me, speaking and yelling, “Women are not allowed to preach!” Then, the next minute they would swear and almost grit their teeth at me. They will not quench this fire that is shut up in my bones! It doesn’t matter where you preach the Gospel. Just open your mouth wide and He will fill it.

The same denominations here in America that say that women cannot speak in Church are the very ones that will send them overseas and have them start churches and call them missionaries! Something is wrong with that picture! God is getting ready as it says in Joel, “to Pour His Spirit out on our Sons and Daughters and they shall Prophecy!!” If we look at the gift of Prophecy a different way, it is simply laying our head on Daddy’s breast and re-sounding His heart!! It is saying what we hear Him saying and doing what we see Him doing! We cannot deny the anointing that rests upon women in this day! Who are we to throw away God’s anointed because of our doctrine? God help us! Help us to see that you are no respecter of persons in this hour! This is a word the Lord gave to me in 2011 and it is happening in this hour!!

The Lord spoke this to me today as a title, for what was about to happen to His daughters! God says that I am about to set my daughters free from the bondage that they have been in for years! I am about to set the women free from the spirit of religion and the spirit of Jezebel (control and manipulation)!! They will come out of the bondage in which the circumstances of life have kept them!! Some of these women have been prepared for such a time as this as Esther! Many of them have been in horrific circumstances to the point that they have lost all hope of ever fulfilling their destinies.

God is about to change all of that!! There is about to be a mass exodus of the women that have been wild after me and have been bound by the circumstances of life! Their hearts have been on fire for their Bridegroom and have been secretly seeking Me and saying, “When God, when??” And I am saying that your king is about to come and bring justice and Mercy upon you. You will see your king in all His Glory and fury rise up for the injustices that have been done to His daughters! I have longed for and waited for this time, and now is the time for My daughters to come into the fullness of what I have called them to before the foundation of the world.

My daughters will be “GIRLS GONE WILD FOR JESUS”! There will be no stopping what I am about to do in them! They will preach, and prophecy with such zeal that no one will be able to resist the anointing that I am about to put upon them! For I am going to put the mantles of Deborah, Esther, Rahab, Ruth, and Anna upon them, even the mantle of Kathryn Khulman. They will lay hands on the sick and they shall recover! They will be fearless before their enemies!! Men will look on them and say “what has happened to my wife or daughter?” They will be fearless and bold to speak the truth in Love! No man will stop what I am about to do in My women! It will be as though they burst through a veil. It will be as though they climbed over a wall and are running toward their love out of control!! God is going to take the women of this hour and quickly put them in places of authority like Deborah and quickly put them in Kings’ and Presidents’ houses, and will give them favor with those in authority. And, Yes, I will put some in authority! I am God and I do as I will!! I put them in places as I will!!

I will place them in churches and give them favor to preach, teach and prophecy!! I will do a thing with them that you have not seen before in the USA and in many countries of the world! I will give them influence in the business world! Think not this a strange thing that I will do, for it is the time for woman to step up and bruise the head of the serpent that has deceived her into prostituting herself to men for a “bowl of Soup” No amount of fleshly lusts or lures will stop them! They will know that though they have “sold themselves for nought.” They will know that “their maker is their husband and He will take care of them no matter what they face!

Fearless in the face of the enemy, because of all they have been through, and all they have overcome in their captivity, The Lord will be more precious to them than silver and more costly than gold! These are the women that I am about to use in such a mighty way that the world will be astounded! Jealousy shall arise and persecution, but this will not affect them because they have been through this already and have overcome it with love. I am opening up the Gates this year and when My women come out the sound of their running will shake hell and hell will be on alert that “God’s Girls Gone Wild” for their Lord are about to plunder Hell and crush the serpent’s head!! Watch out, world because “God’s Girls, Gone Wild for God” are coming to a city near you!!!