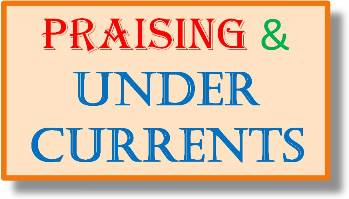 I think it is time to start praising the Lord.  I am feeling undercurrents!!  That is the only way that we can silence the enemy!  By the way someone just said to someone that is reading this ” I wonder what is going on here?” and you said “It is just the enemy!”  The Lord said this just now.. “So if you know it is the enemy, then why are you listening to him? Selah….”

“Out of the mouths of babes and unweaned infants You have established strength because of Your foes, that You might silence the enemy and the avenger”   Psalm 8:2 (AMP).

Then in Matthew 21:15-16 Jesus quoting Psalm 8:2 to the Pharisees that were disgusted with the crowd that were giving Him praise He said something to them as it shows in these two scriptures:

“But when the chief priests and the scribes saw the wonderful things that He did and the boys and the girls and the youths and the maidens crying out in the porches and courts of the temple, Hosanna (O be propitious, graciously inclined) to the Son of David!  they were indignant.  And they said to Him, Do You hear what these are saying?  And Jesus replied to them, Yes; have you never read,  Out of the mouths of babes and unweaned infants You have made (provided) perfect praise?”

So in these two different passages, Jesus was saying that when we praise Him as a little child it silences the enemy and that the words strength and praise are synonymous!!!!

So when you need strength in your battle and you need to silence the voice that is telling you to quit and give up..  Just start to praise Him in the midst and you will see that you can not hear the enemy while you are shouting the victory!!!!!

Jo Ellen Stevens of TCIC Ministries is a Prophetic speaker, author, worshiper and intercessor.  She has ministered with her husband for 23 years and was a worship leader at the Assembly of God for many years.  She is an ordained minister (Restoration Ministries) and works with Restoration Ministries in their Ministry Rooms doing prophetic worship with her husband.  She has taught many bible studies and have led many intercessory prayer groups.