↓
Home→Prophecy→Wake Up!  America is Spiritually Torn Up!!

America is torn up, from the floor up, and very hypocritical. The government is always interfering and pretending that they have the solutions to the world’s problems and issues, when it can’t even fix its own finances, problems and racial issues …

The American government is very cunning and deceptive, and they lie straight and bold faced to the American public. They pretend to be enemies in the eyes of the people, but they are all working together behind closed doors for their anti-Christ agenda. Actually, they have a plan for all of us, and with the media, they make us see each other as the enemy and the bad guys, when in actuality, they have hidden Satanic agendas for which they are laying the foundations. And yes, let’s not forget their main platform for getting out their wicked schemes. The “evil, one-eyed, American main-stream media machine” supports and pushes their agenda in our faces, by showing every negative aspect of any crisis and only showing what they want the public too see and what they want the public to support.

The media contaminates the attitudes, opinions and beliefs of the people, while simultaneously killing all the “birds” with one stone. They accomplish this by being double tongued and double mindedness and by pretending to support and oppose certain issues, just to draw in an audience and to get a large amount of ratings! A lot of people are severely blind to the facts of what is really going on behind the scenes and are literally confused, with their eyes wide shut!!!!

The government is selling the people false hopes and wants to make “puppets” whom they can manipulate and control. While at the same time, they are pretending to want what’s best for the people and rallying for peace across the world.

Let me ask, how can they pretend to rally for peace and harmony that is of God and then on the other hand, oppose and go against the very word of God and His laws by supporting and approving ungodly man-made laws, and by leading this nation and the world to drink from the bitter cup of sin, sexual immorality, and idolatry? The devil is a liar!!!! That’s hypocritical, two-faced and double minded!!! 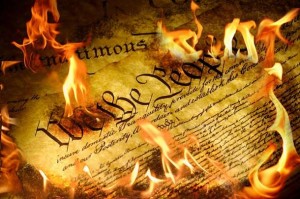 To say the least, when they are being installed in office, they put their ungodly claws on the Holy Bible and swear to up hold the Constitution, but they do it with a forked and lying serpent tongue! America is spiritually torn up and God will judge!

A lot of people’s hearts are fainting because they have their reliance and trust in the government, while the government is failing to produce solutions to their problems. The government cannot suddenly bring peace and fix all of the problems of this nation or the world!!!

This only goes to show that our only hope is in Christ Jesus, our Lord and Saviour! And if you have not accepted Him, the time is now!! It is time because this is only the beginning of the world’s troubles and sorrows to come!

Its time to wake up and see what is really the reasons for the majority of the troubles in this nation and across the world. These nations are all interconnected with their evil, wicked schemes and plans. There is a lot of spiritual wickedness and evil powers at play when it comes to these national and world political leaders. And yet here in America, they have the audacity to declare that we are “One Nation under God”….

Hhmmmm… Makes you wonder sometimes just what “god” they are referring too!

“The god of this age has blinded the minds of unbelievers, so that they cannot see the light of the gospel that displays the glory of Christ, who is the image of God” 2 Corinthians 4:4.

“For false Christs and false prophets will rise and show great signs and wonders to deceive, if possible, even the elect” Matthew 24:24.

“Nation will rise against nation, and kingdom against kingdom. There will be famines and earthquakes in various places. All these are the beginning of birth pains” Matthew 24:7-8.

Geraldine Coleman: Is a teacher and educator and ministers to prisoners at a prison facility where she is an instructor.